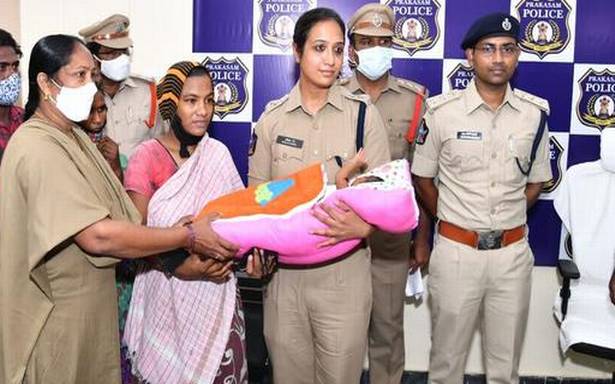 Prakasam police acted swiftly to reunite an infant with her mother within hours of her being kidnapped from the Markapur government hospital, here on Saturday.

Officials said the baby, immediately after delivery, was put in a phototherapy room for treatment of jaundice from where she went missing on Saturday. After Komali’s husband Srinivasulu lodged a complaint, police swung into action and registered a case under Section 363 of the IPC. Going through CCTV camera footage, Markapur police found that the baby was whisked away by a burqa-clad woman from the hospital.

After alerting all police stations in the district and by erecting checkposts on inter-district borders and stepping up vigil at important road and railway junctions, Markapur police noted the movement of a suspect near a private hospital in Markapur town in the wee hours and nabbed Rehana, who reportedly confessed to the crime.

In her confession, the accused reportedly told police that she had sold the baby to her relative for ₹50,000. The accused women were produced before the Markapur Additional Judicial First Class Magistrate who remanded them to 14 days’ judicial custody.

The SP patted the police personnel concerned for cracking the case within hours.