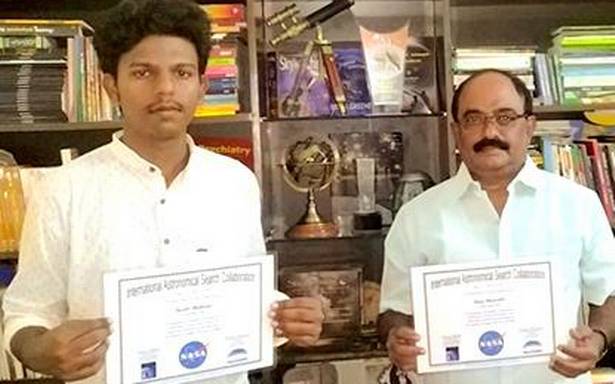 The three asteroids identified by them have been temporarily named BBM2101, BBM2102, and BBM2103.

A teacher-student duo in the city has discovered three new asteroids as part of an International Astronomical Search Collaboration (IASC) Citizen Science Programme, organised by National Aeronautics and Space Administration (NASA). Both were part of the Tiruchi Astro Club, which participated in the programme.

Mr. Bharathi said that the four-member team which took part in the campaign was the only team from Tamil Nadu. They were put through a period of rigorous training to understand the software used and the method of studying asteroids beforehand.

‘Many people think that one requires a telescope to view and identify asteroids. Although that would help, we used a software called Astronomica, prescribed by NASA,’ he said. NASA had a special telescope installed in Hawaii, which takes pictures of the sky at regular intervals. As part of this programme, these photographs are sent to the participants, he said.

‘We process these photos on the software and are able to view parts of the outer space which have been photographed. Studying it helps us identify moving objects,’ he said. Once a moving object is identified, some tests need to be conducted to identify it. ‘A detailed report is sent to NASA through the campaign, and after they conduct preliminary studies, we receive preliminary approval,’ he said.

The three asteroids identified by them have been temporarily named BBM2101, BBM2102, and BBM2103. ‘NASA will study them in detail, determining orbit, size, speed, among other details, following which they would be given an official name, for which we would be consulted too,’ he said. A total of 167 asteroids were discovered by the participants of the programme. ‘We are looking to train more students interested in taking part in similar programmes,’ he said.