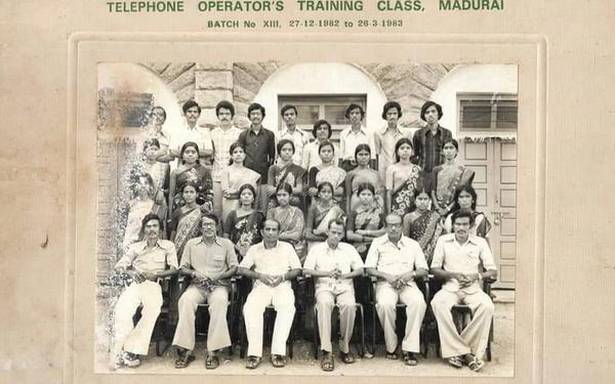 The actor was on the lookout for it for many years

An old photograph with a title, ‘Telephone Operator’s Training Class, Madurai,’ dating back to 1983 has been making the rounds across social media platforms since Saturday morning. It was this photograph that actor Vivekh was on the lookout for many years.

The photograph was taken when Vivekh had completed the three-month-long training programme for the post of telephone operator in the Department of Postal and Telecommunications (now known as BSNL) at Tallakulam in Madurai.

The photograph was shared among the BSNL employees since Saturday morning.

Veteran journalist Jenraam, who was actor Vivekh’s classmate during the training programme, shared this photograph on his social media page on Saturday. Speaking to The Hindu, Mr. Jenraam said that he and Vivekh had shared a strong bond during their training period.

While Mr. Jenraam stayed at a hostel near Tallakulam, Vivekh stayed with his family in Madurai. “Although I and Vivekh were benchmates, we didn’t speak much during the initial week. But later our bond started becoming stronger,” he said.

The veteran journalist said he and Vivekh would have several debates due to their differences in tastes. “We would talk about the works of poet Vairamuthu and writer Sujatha, and the music composed by Ilayaraja and M. S. Viswanathan,” recalled Mr. Jenraam.

Vivekh was a multi-faceted personality, which was evident even during those days, said Mr. Jenaraam. He was good at acting, mimicry and music. “Occasionally, he used to play ‘Alaipayuthey kanna’ song on harmonium, which remains one of my favourite versions of the song to date,” he added.

But the photograph again came to the light on Saturday morning after the demise of Vivekh. “The moment I saw the photograph on Saturday, I became emotional as it took me back to those good old days,” said Mr. Jenraam.