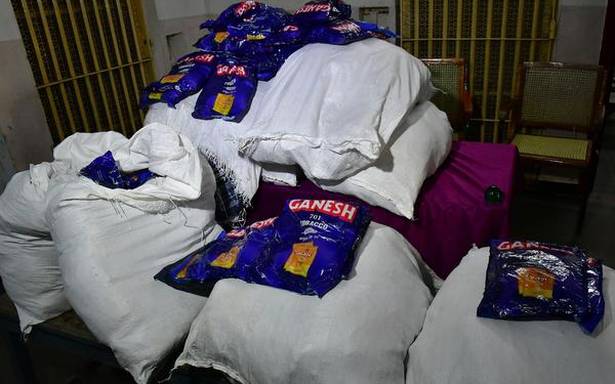 The police have detained 45 persons under the Goondas Act since January last and arrested 135 persons for allegedly smuggling ganja and banned tobacco products over the past three months.

Speaking to reporters here on Thursday evening, Mr. Senthamarai Kannan said the Tirunelveli City Police, after forming special team to check smuggling of ganja into the city from Theni and banned tobacco products from various parts of the country including Bengaluru, Pune and Hyderabad, conducted surprise check in suspected places based on the intelligence inputs and seized 71.870 grams of ganja in the past three months and arrested 59 persons in this connection.

The special team also seized 130.620 grams of banned tobacco products from 76 persons who had smuggled it from other parts of the country.

Warning the courier service firms that knowingly or unknowingly transport parcels containing narcotic substances and banned tobacco products, he said that they would also be booked under the Narcotic Drugs and Psychotropic Substances Act, 1985. Mr. Senthamarai Kannan added that those smuggling these products would be detained under the Goondas Act also.

He said 34 criminals, four persons involved in burglary and robbery, three drug peddlers and four more persons who smuggled ration rice had been detained under the Goondas Act since January. Police had recovered ₹24.77 lakh-worth stolen properties from the criminals.

The Commissioner of Police urged the property owners to inform the police station concerned whenever new tenants move into their houses to formally check their background and other information being provided by the tenants.

“Since good number of outsiders, especially workers from North India, are coming here for work, they will certainly find houses here to settle their families. As the landlords do not know about the background of their tenants, they should inform the police station concerned about their new tenants so that the police can verify the information such as the tenants’ occupation, their background etc. This background check is very important for preventing crimes such as burglary, robbery or even murder for gain,” Mr. Senthamarai Kannan said adding that similar procedure should be followed by the contractors also who hired workers from other areas.