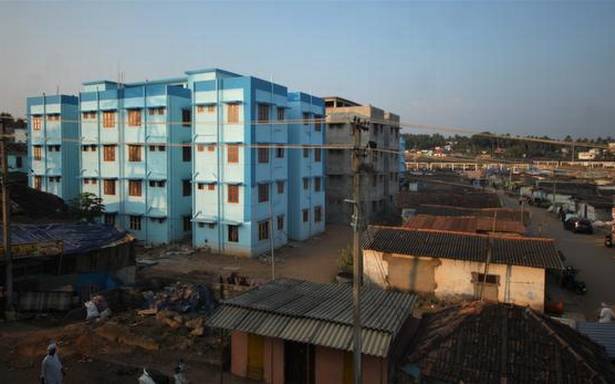 The long wait for new flats for 322 families in the capital’s coastal region is about to end this month with the completion of construction of flat complexes at Mathippuram near the Vizhinjam fishing harbour, under the second phase of the Rajiv Awaz Yojana (RAY) housing project.

However, the city Corporation will face fresh challenges in executing the third and fourth phases of the project, due to issues with temporary rehabilitation and ownership of the land.

At a meeting at the Corporation on Tuesday to discuss the progress of the housing project, officials said that much of the work has been completed.

The Corporation has asked the agency executing the project to complete the remaining work by June 25, so that the house keys can be handed over to the beneficiaries by the end of this month. Mainly, the work on providing power and water connections to the individual households are remaining now.

The project began six years back, with a plan to complete the construction of new flats in place of the old huts. The residents from the plot were shifted to a rehabilitation site set up by the Corporation, while a few of them shifted to rented accommodation. But the work on the flats could not begin as nine families refused to shift for around three years. Later, police were brought in to shift them.

The Corporation could face similar issues in the third phase of the project, for constructing flats for 320 beneficiaries, which is also proposed in land currently occupied by houses of fisher families. Corporation officials expect at least a few of the families to resist the plan to move them to a temporary rehabilitation site, especially considering the delays in the previous phase of the project.

The fourth phase consisting of houses for 120 beneficiaries is proposed in land owned by the Harbour Engineering Department. Though the Department had initially responded positively to the proposal, it is now not so keen on parting with the land. The Department had recently prepared a draft master plant, as per which a processing unit is to be set up in this land. The Corporation now plans to resolve the issue through a ministerial-level meeting.

The RAY project in Mathippuram was envisaged to construct flats for 1,032 families in the fishing community. In the first phase, which was completed a few years back, houses were provided to 222 families. These are spread out along the coast, with smaller housing blocks of four or five units each.

Under the RAY project, the Centre provided 50% of share of the funds for a house, the State Government provides 30%, the city Corporation provides 10% and the beneficiary has to pitch in with 10% of funds.