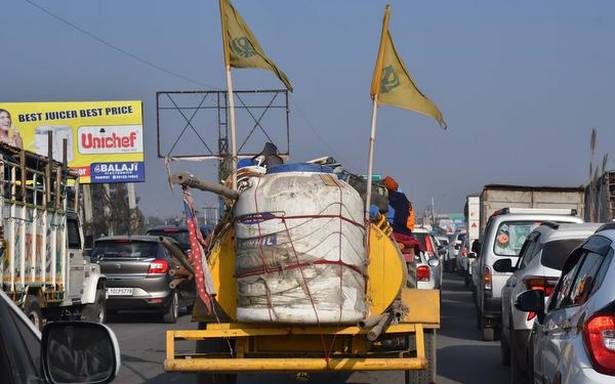 Samyukt Kisan Morcha says it will not fight the elections.

Ahead of the Punjab Assembly elections due early in 2022, 22 of the 32 Punjab-based farmer unions that were at the forefront of the agitation against the now repealed farm laws announced on Saturday that they would contest the election under the banner of ‘Samyukt Samaj Morcha’ even as the the umbrella body Samyukt Kisan Morcha (SKM) that spearheaded the protests asserted that they would not be contesting the polls.

Several unions, which had joined hands in protesting against the three laws, came out with divergent decisions on contesting the poll.

The new political front, which announced it would contest all 117 Assembly seats, is being anchored by Balbir Singh Rajewal of the Bharatiya Kisan Union (BKU (Rajewal)). Harmeet Singh of the BKU (Kadiyan) said that after coming back from the Delhi borders, people in Punjab are pinning high hopes on farmers to resolve long-pending issues that have plagued the State. “To fulfil the aspirations of the people, 22 unions have decided to jointly contest the elections,” he said.

The Bharatiya Kisan Union (Ekta-Ugrahan) (BKU(E-U), one of the largest outfits in Punjab and the Kisan Mazdoor Sangarsh Committee (KMSC), a prominent outfit at the forefront of the agitation, clearly said they won’t be contesting the election. Both were not part of the 32 unions but were working in coordination with them towards getting the farm laws revoked.

“We were with the other outfits only for the movement but not for the elections. If any harm comes to our struggle on farmers’ issue due to the decision of these [22 unions] to fight the election, they shall be directly responsible for the consequences. These unions have taken their own decision but we do not agree with it,” BKU (E-U) general secretary Sukhdev Singh Korikalan told The Hindu.

Sarvan Singh Pandher, general secretary of the KMSC, said the constitution of their outfits does not allow electoral politics. “We will continue to work as a pressure group. If the farmer unions contest the election, we will judge them with the parameters similar to any other political party. We won’t either support or oppose them,” he said.

Jagmohan Singh, general secretary, Bhartiya Kisan Union (Ekta-Dakonda), said they will not take the plunge into electoral politics and a meeting has been convened on December 27 to decide whether or not to support the farmer unions which want to contest.

Jagjit Singh Dallewal and Darshan Pal, members of the coordination committee of the SKM, said the platform of more than 400 different ideological organisations across the country has been formed for issues concerning farmers.

“There is no call for the boycott of elections and no consensus on going ‘jointly’ to contest them. After the repeal of the three agricultural laws, the struggle has been postponed and the remaining demands will be decided in the meeting to be held on January 15,” they said in statement.

“It has been decided that the individuals or organisations participating in the elections cannot use the names of the Samyukta Kisan Morcha or the 32 organisations. Doing so will result in disciplinary action,” they said.