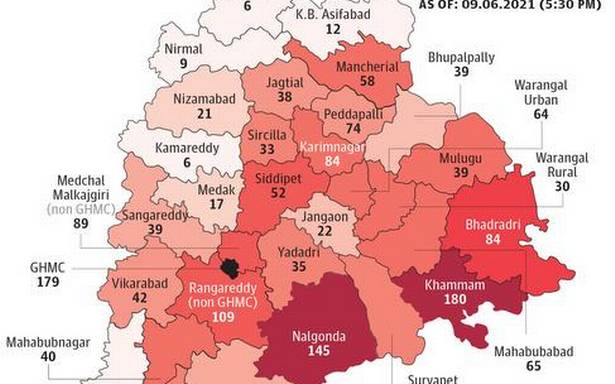 There was a slight reduction in COVID-positive numbers with 1,813 cases detected on Wednesday as compared to 1,897 cases the previous day. Seventeen persons also died during the day, up by two from Tuesday.

Testing continues to be above one lakh with 1,19,876 tests conducted and 1,420 results awaited as against 1,33,134 tests conducted on Tuesday. However, there is no break-up between rapid or RT-PCR tests in the official bulletin issued by Director of Public Health G. Srinivasa Rao.

Although the capital and surrounding areas report a high number of cases daily, it is gradually coming down. However, in some of the districts, it is the opposite. For instance, Khammam district caseload has been increasing from 142 to 180 within a week span; Suryapet district from 84 to 91, Mulugu 31 to 39, Jayashankar Bhupalapally 35 to 39 and Narayanpet 14 to 18.

With surge in rural areas, the medical and health department has increased the active micro-containment zones from 275 to 302 with highest in Nalgonda at 92 followed by 69 in Mahabubabad, 24 in Jagtial, 16 in Hyderabad, 13 in Yadadri-Bhuvanagiri, 12 in Kumuram Bheem and 11 in Bhadradri-Kothagudem.