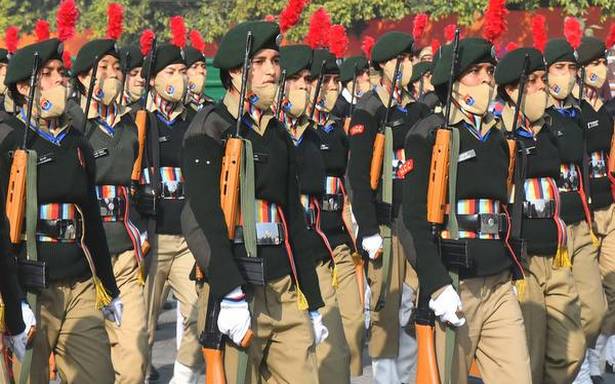 Participation extended beyond 10 countries for the ‘Azadi ka Amrit Mahotsav’

The process to select participants for the National Cadet Corps (NCC) Republic Day Camp 2022 is in full swing. Competitive tests were conducted in 25 friendly countries in September to select approximately 300 NCC cadets and equivalent youth organisations, the Defence Ministry said on Friday. This year, 15 more countries have been invited in addition to the 10 countries that were usually invited.

A Ministry statement said: “The selection process will be completed by the end of October 2021. From each country, 10 cadets along with their instructors numbering total of around 300 participants will take part in the RDC-2022.”

As part of “Azadi ka Amrit Mahotsav”, the participation of cadets has been expanded to 15 more countries, that is, France, the U.S., the U.K, Canada, Brazil, Argentina, Japan, the United Arab Emirates, the Sultanate of Oman, Australia, New Zealand, Nigeria, Mauritius, Seychelles and Mozambique. Earlier, 10 friendly countries were usually invited — Russia, Singapore, Vietnam, Nepal, Bhutan, Sri Lanka, Bangladesh, the Maldives, Kyrgyzstan and Kazakhstan — for the NCC Camp, the statement said.

The competitive test comprised of a quiz on India to promote knowledge about the country’s culture and heritage, geography, politics, achievements and famous personalities, among the participants. The tests were conducted by the Indian Embassy/High Commission in their respective countries in coordination with a host country organisation, the statement said. “Till now seven countries, have confirmed their participation. The rest are in the final stage of confirmation,” the statement said.

The NCC Republic Day Camp 2022 selection process has also been commenced in the States and Union Territories by NCC Directorates. Around 1,600 cadets from across the country would participate in the NCC Camp, the Ministry said. Due to COVID-19 protocols, the duration of the Camp would be 43 days, from December 17/18, 2021, including the quarantine period, and the actual camp is scheduled to commence from January 16 to January 29, 2022, including the Prime Minister’s Rally on January 28, 2022.