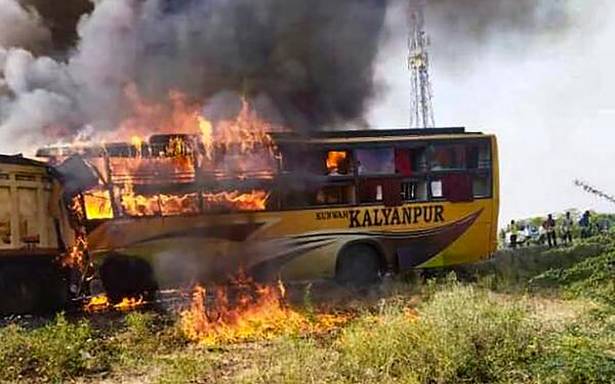 Prime Minister Narendra Modi said an ex-gratia of ₹2 lakh each from PMNRF would be given to the next of kin of those who lost their lives due to the accident.

A truck collided head-on with a bus in Rajasthan’s Barmer district on Wednesday, leaving 12 people dead and 32 others injured, a government official said.

The accident occurred near Bhandiyawas village on the Barmer-Jodhpur National Highway and both vehicles caught fire following the collision.

"Twelve persons have died and 32 others were injured. Some of the injured were referred to Jodhpur for treatment and some were discharged," Barmer district collector Lok Bandhu said.

There was chaos at the accident site and hospital where the victims were taken.

Fire tenders were rushed to the spot to douse the fire which had engulfed the two vehicles.

"The bus was full of passengers," Shahrukh, one of the passengers on the bus, told reporters in Jodhpur.

Another survivor told reporters that he was sitting in the rear side and jumped out of the window.

He said that those who were sitting at the back managed to jump through windows and saved their lives. Those towards the front were trapped.

As soon as the news spread, passengers’ family members rushed to hospital.

"I have never seen such a heart wrenching scene," said one of the eye-witnesses.

Prime Minister Narendra Modi expressed his grief and announced a relief package for the dead and those who got injured in the incident.

"It is saddening that people have lost their lives due to a bus-tanker collision at the Barmer-Jodhpur Highway in Rajasthan. In this hour of grief, my condolences to the bereaved families. I pray that the injured have a quick recovery," Mr. Modi tweeted.

He said: "An ex-gratia of ₹2 lakh each from PMNRF would be given to the next of kin of those who lost their lives due to the accident at the Barmer-Jodhpur Highway in Rajasthan. The injured would be given Rs 50,000 each."

Chief Minister Ashok Gehlot spoke to the Barmer district collector and asked him to ensure proper treatment for the injured.

Best possible treatment will be ensured for those injured in the accident, Mr. Gehlot said in a tweet.

Nagaur MP Hanuman Beniwal also expressed his anguish over the accident and prayed for those who lost their lives.