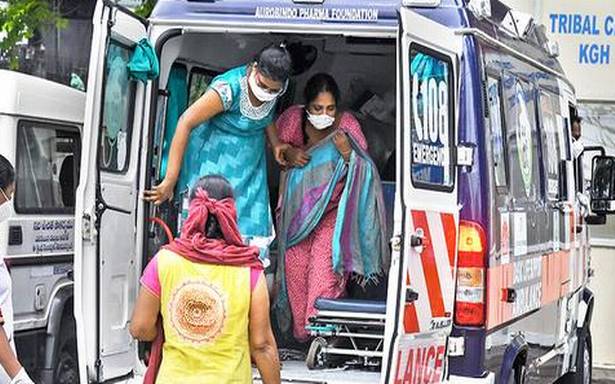 521 patients shifted to hospitals in first nine days of the month, says official

He appreciated the dedication of the emergency medical technicians (EMTs) and ambulance pilots in the discharge of their duties. A total of 48 ambulances are available in Visakhapatnam district. Of these, 45 are in service, while three would be on standby. Thirteen ambulances are being used in the city and suburban limits, while there are nine vehicles each in Anakapalle and Narsipatnam divisions and 14 in Paderu division.

Of the 48 ambulances in the district, 19 are new ones. Two of the vehicles, under Anakapalle and Paderu Divisions, have been equipped with neonatal care equipment for taking care of newborn babies. All the ambulances have monitors and infusion pumps while the ALS vehicles have ventilators.

“A total of 46,000 cases, including 4,000 COVID-19 cases, were attended by 108 ambulances between July 2020 and March 2021 in Visakhapatnam district” Aurobindo Pharma Foundation Chief Operating Officer M.S. Swaroop told this correspondent during his visit to the city last month.