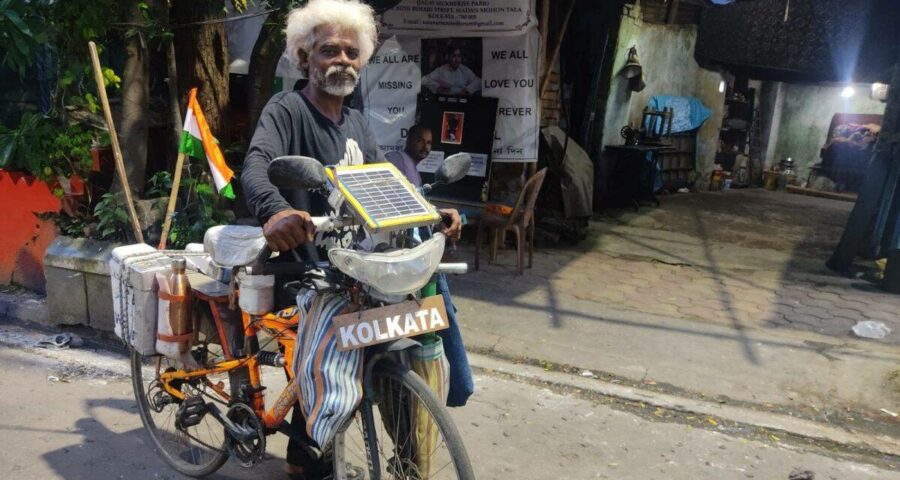 “I had a dream to go around India, visit the beautiful places, speak to the people and learn about their culture but never had the money to fulfil it. So, I decided to set out on my cycle,” said Parimal Kanji, who pedalled along the periphery of India and in less than eight months, completed his tour of above 15,000 kilometres.

On January 1, 2021, the 55-year-old man from Kolkata mounted his cycle and started wheeling towards his dream.

Speaking to indianexpress.com, Kanji, a gas stove repairman, said, “Once the lockdown was lifted last year, I told myself it is now or never. I left Kolkata on January 1 this year with water, biscuits, bare minimum bedding, cycle-repairing equipment and Rs 2,100 contributed by my friends.”

After leaving West Bengal, Kanji crossed Odisha, Andhra Pradesh, Tamil Nadu, Kerala, Karnataka, Goa, Maharashtra, Gujarat, Rajasthan, Punjab and reached Srinagar on April 9 before he had to halt his tour for two and a half months due to snow and the next round of lockdown.

“When I reached Srinagar and realised I’ll have to be here for a while, I called up Shaukat, a shawl-seller who used to visit Kolkata, and asked for help. He got me in touch with Muna Sahab, a member of the Regal Lane Traders Association, who arranged a place for me to stay and also provided me food. During my stay, many members of the association helped me with whatever they could and this changed my view towards Kashmiris,” Kanji said.

Once the snow cleared and the lockdown was lifted, Kanji left for Leh-Ladakh but close to Ladakh, he was asked to get back to Srinagar for a Covid test. “I was literally stranded but then a pick-up van was on its way to Srinagar and the driver agreed to help me. The driver, a Kashmiri, didn’t even charge me money,” Kanji said.

After a negative Covid report, Kanji resumed his journey and reached Leh-Ladakh. Asked if he ever feared of contracting the virus, Kanji boasted, “The kind of exercise I undergo while cycling, I knew Covid won’t affect me.”

While on the streets, he was stopped by many YouTubers and Instagram influencers, who made his videos and shared his extraordinary experience online. It was a YouTuber’s video made near Ladakh that made him viral on social media, Kanji said.

After returning from Ladakh, Kanji pedalled his way into Himachal Pradesh, crossed Uttarakhand and entered Nepal from Banbasa. Although in his entire tour, Kanji claimed to have met “a greater number of good people” who helped him with whatever they could, in Nepal, his wallet was stolen and he lost his documents and Indian currency notes worth Rs 4,000.

“All along my journey, people gave me whatever they could and although my wallet was stolen from my cycle parked outside a hotel in Nepal, I didn’t worry because the trip had already taught me that there are a greater number of good people than the bad and some or the other person would help me on my way back,” Kanji said.

Kanji had planned to enter Sikkim from Nepal and then move towards the northeastern states of India but a 35-km wrong turn led him to dump the route, at least for now. “I was disappointed because if I had to go back to the spot which would lead me to Sikkim, I would’ve had to pedal a constant uphill for 35km,” he said.

Difficulties, moments of pride during the tour

While there were several difficulties, including walking in knee-deep dust with his cycle near Sarchu and climbing uphill and there were times he was immensely helped, Kanji narrated a few special moments with indianexpress.com.

“I had entered Himachal Pradesh and was travelling on the highways that have no guardrails when suddenly my cycle’s brakes failed. I was on a slope and didn’t know what to do. I somehow managed to stick one foot inside a wheel to bring the cycle to a halt but in the process, I fell down and got bruises all over,” Kanji said.

Sharing his moment of pride, Kanji said, “I was near Zoji La and by that time I had already started gaining popularity on social media. I was cycling happily when an Army convoy stopped me and I couldn’t believe my eyes when the jawans saluted me. I was in tears, I thought to myself who am I? Is this real?”

While Kanji was helped everywhere he went, he says there are a few special people he can’t thank enough. “While in Karnataka, a man, Kryptal Fernandes, stopped me and after speaking with me for a while, he gave me his solar panel set which helped me charge my phone, power bank and torch. In Gujarat, Pratish, a trader, gifted me a sleeping bag and other cycle repairing equipment along with a number lock. In Maharashtra, a man gave me a tent and in Shimla, Lucky, a young guy, took me to his house and asked me to stay there.”

After his return to Kolkata on August 14, a city-based rider’s club got in touch with Kanji and started helping him out. Subhajit Sinha, founder of Riders Community Of Bengal, said, “After a YouTuber posted Kanji’s video on our Facebook page, he went viral and I started receiving messages from various people that he should be helped out. We then arranged a Facebook live which received more than a lakh views and then got him connected with several other riders’ clubs who are trying to help him out financially.”