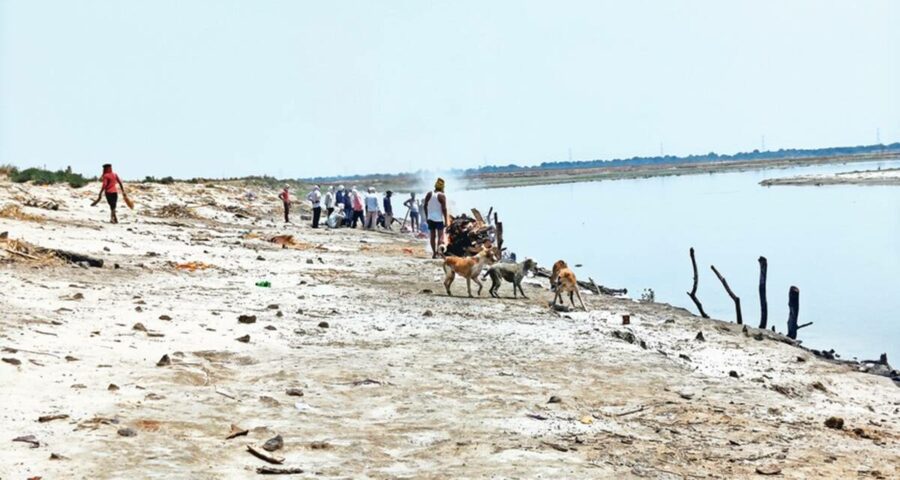 The direction comes after scores of bodies were found in several districts along the Ganga, including Ghazipur and Ballia. The Uttar Pradesh government has directed district officials, senior police officers and Panchayati Raj officials to ensure that ‘Jal Pravah’, the practice of throwing bodies in river after death, must stop and that funds must be given to poor families to cremate their family members.

The direction comes after scores of bodies were found in several districts along the Ganga, including Ghazipur and Ballia.

In a letter to the officials, state Chief Secretary RK Tiwari has said that the mortal remains of people dying of Covid-19 or other ailments are being thrown into the river.

“At several places bodies have been recovered from rivers. It must be ensured that bodies are not floating in rivers,” says the letter, copies of which have been sent to divisional commissioners, DMs, and senior police officers in the state.

The letter says that if bodies are found floating in rivers, they must be cremated with respect. “It is possible that these bodies are infected with Covid. There is a possibility that these bodies will pollute the rivers and are also likely to spread the infection among people,” reads the letter.

It further directs officials to draw up a plan to stop the practice of ‘Jal Pravah’ and inform police officers about sites where it might happen to prevent people from indulging in this act.

The letter says that police personnel posted along ghats must be asked to ensure that proper procedure or protocol is followed while cremating the bodies of those who died of Covid. It adds that a grant of Rs 5,000 each has been sanctioned and released for poor families so that they can cremate their dead following protocol. Municipal commissioners have been asked to form committees for ensuring that cremations are performed as per rituals and bodies are not dumped into rivers. The panels have been instructed to hold meetings every two days and send their reports to the government by email before May 18.

The letter further directs officials that cremation must be done in accordance with instructions in a letter issued by the National Human Rights Commission (NHRC) on May 14, Friday.

The NHRC had issued notices to the Union Jal Shakti Ministry, as well as Uttar Pradesh and Bihar governments, after receiving complaints about several bodies found floating in the Ganga, which straddles the two states.

Additional Chief Secretary (Panchayati Raj) Manoj Kumar Singh has also written to district magistrates, directing them to ensure that bodies are not dumped in the river after deaths and that funds for cremation be released for poor families. He also ordered Panchayati Raj officials to also ensure that the practice of ‘Jal Pravah’ is discouraged and prevented.

“It has come to our notice that bodies after deaths due to Covid-19 and other reasons are floating in rivers instead of being cremated. Bodies have been found in rivers at several places,” read his letter to DMs.

It also says that as per an earlier order, Rs 5,000 each has been allotted for every poor family for cremation of their dead. “If there is death due to Covid, a sum of Rs 5,000 must be given to the family immediately for cremation. If the families are not willing to participate in the cremation, then it must be done by Gram Panchayat using the fund. The Department of Urban Development has also been given the authority to release Rs 5,000 for cremation of people who have succumbed to Covid,” reads the letter, also dated May 14.

It says as per information, there are three reasons for bodies found floating in rivers. These have been listed as lack of money, traditional rituals and fear of Covid resulting in people dumping their dead in the river.

The letter said the money problem should be addressed by allocating funds for cremation, while people must be made aware of the severe consequences that the practice of ‘Jal Pravah’ entails. “Under no circumstances should bodies be found floating in rivers. If a death happens due to Covid, the cremation should be performed as per protocol,” it says.

Gram pradhans have also been empowered to ensure that money is allocated to poor families for cremation. “For this, gram pradhans can seek the support of shetra panchayat and zila panchayat members,” says the letter.