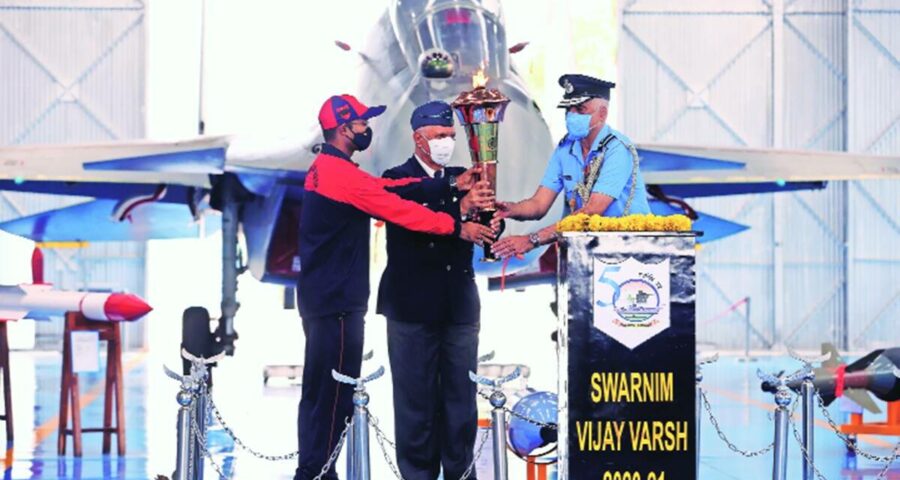 The day is celebrated because on this day in 1932, the Air Force in India was officially raised as the supporting force of the Royal Air Force of the United Kingdom. THE 89th Air Force Day celebrated at the Air Force Station, Pune, on Friday was special as it was held concurrently with the base hosting the Victory Flame that marks 50 years of the 1971 War. The occasion is being observed across the country as the Swarnim Vijay Varsh.

The series of events under the banner of Swarnim Vijay Varsh was inaugurated by Prime Minister Narendra Modi on Vijay Diwas, December 16 last year by lighting four ‘Victory Flames’ from the flame of the National War Memorial. The four flames are travelling in four directions and are being taken to major cantonments, and across towns and villages where the 1971 war heroes are from.

Pune’s Air Force Base, located in Lohegaon which houses two squadrons of the frontline fighter jets Sukhoi-30 MKI, hosted the Victory Flame on Thursday and Friday. The base also celebrated Air Force Day on Friday.

The day is celebrated because on this day in 1932, the Air Force in India was officially raised as the supporting force of the Royal Air Force of the United Kingdom.

The chief guest, Air Marshal (retd) A R Ghandhi, a top Air Commander and decorated officer who fought in both the 1965 and 1971 wars and was awarded the Vir Chakra, laid a wreath at the Victory Flame on behalf of all veterans and service personnel present.

Air Marshal Ghandhi said, “The progress of the Indian Air Force is impressive over the decades. It is now capable of responding to any situation. The force has become ‘the first responder’, be it a war situation or disaster management task today. It is a proud thing for all air warriors.”

Wing Commander (retd) Suresh Karnik, a Vir Chakra awardee of the 1971 Indo-Pak War, who carried out crucial air operations during the war, recalled his experience of striking enemy boats in the Meghna river. Several other 1971 War veterans were felicitated on the occasion.

Earlier on Thursday, Air Commodore Hirendra Assudani, Air Officer Commanding (AOC), Air Force Station, Pune, received the Victory Flame. The Indian Air Force contingent travelled with the flame through all prominent areas of the Air Force Base and the contingent was welcomed by station personnel and their families. The flame was placed at the War Memorial of the Air Force Base, where a ceremonial wreath was laid by the AOC.