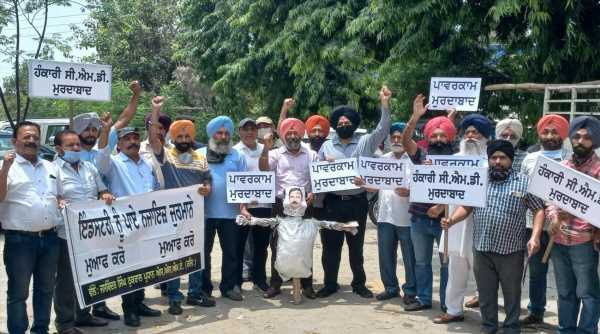 According to Central Electricity Regulatory Commission (CERC), penalty is imposed on the one who uses more load than sanctioned. Fines are imposed every year, but this time it has become a poll issue due to an election year, said an industrialist. Reeling under steep penalties being imposed for overloading, owners of small scale units in Punjab’s industrial hub Ludhiana protested outside the PSPCL’s subdivision office on Monday with husband of a Congress councillor leading the protest.

Congress leader Jaswinder Singh Thukral, whose wife Jaspreet Kaur Thukral is a Congress councillor from ward number 39 of Municipal Corporation, Ludhiana, said: “I am an industrialist first. I have a right to protest as penalties are exorbitant. Even if a person has run the unit for one day more than the sanctioned load, he/she has been charged penalty for the whole year.”

According to Thukral, industry owners have been staging similar protests every Monday for the past three weeks.

Thukral said, “In Janta Nagar division, fines of RS 1.62 crore have been imposed. We have been staging dharnas outside subdivisions every Monday and this was our third week of protest.”

Paramjit Singh, an industrialist from Arjun Nagar of Ludhiana, said,” I have been fined to the tune of Rs 1.63 lakh, while Jasmail Singh of the same area has been fined around Rs 1.13 lakh.”

According to Central Electricity Regulatory Commission (CERC), penalty is imposed on the one who uses more load than sanctioned. Fines are imposed every year, but this time it has become a poll issue due to an election year, said an industrialist.

Gopal Sharma, director commercial, PSPCL, said,”I will be able to tell all the details about penalty and rules on Tuesday as I don’t remember the details off-hand.”

Thukral said, “This policy on overloading has been implemented for the first time in Punjab as earlier fines were not so hefty. CERC passed it but proposal was of State Regulatory Commission only. We will get the penalties waived off.”

K.K Garg, president of North India Induction Furnace and Rolling Mills, said, “Problem of penalties is more in mixed land use areas where owners run factory and live in the same premises. It is a problem in the whole state. Ludhiana is in focus as 60 per cent of industry is here. PSPCL must review their penalty policy.”