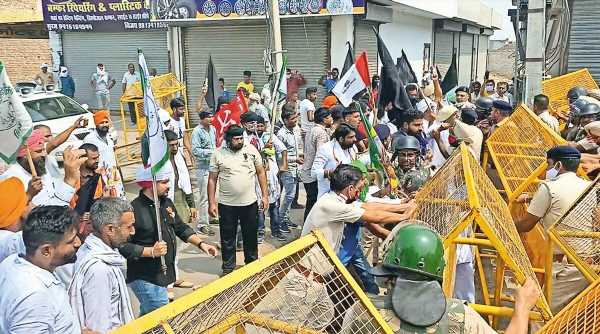 BJP leaders faced protests from farmers in several other parts of Haryana, including Jhajjar, Panipat and Fatehabad, on Sunday as well. On Saturday, they had faced protests in Jind, Hisar and Yamunanagar where they had gone to attend party events. A GROUP of farm protesters on Sunday gheraoed Haryana Assembly Deputy Speaker Ranbir Singh Gangwa in Sirsa, where he had gone to attend a party meeting. The protesters allegedly resorted to stone pelting as well. They also blocked roads at five locations, demanding release of four people who were detained.

Late at night, the detained protesters were released, and farmers cleared the roads.

BJP leaders faced protests from farmers in several other parts of Haryana, including Jhajjar, Panipat and Fatehabad, on Sunday as well. On Saturday, they had faced protests in Jind, Hisar and Yamunanagar where they had gone to attend party events.

The saffron party has been trying to hold organisational activities after keeping the same on hold for a while due to protests against its leaders in the state. As part of their agitation against the Centre’s three farm laws, farmer outfits had announced a “social boycott” of BJP-JJP leaders. However, the ruling BJP has been alleging that the Opposition has a hand in such protests, and only a “handful” of people are supporting the farmer agitation.

On Sunday, BJP’s Sirsa district unit executive meeting was held at Chaudhary Devi Lal University. Farm protesters organised dharnas in front of all the university gates. “When Gangwa’s cavalcade was coming out of the university after the meeting, the policemen formed a ring around his vehicle to ensure a safe exit. However, the protesters managed to reach near his vehicle and gheraoed him. The cavalcade continued moving at slow speed,” said a source.

A purported video of the incident shows the protesters, with black flags in hand, rushing to Gangwa’s vehicle and security personnel trying to stop them. Sources said the officials ensured the safe exit of a senior woman BJP leader from the meeting while arranging the vehicle of an administrative officer from the town.

According to sources, when some of the protesters were taken to Sadar police station, a dharna was organised there as well. Demanding release of the protesters, a dharna was held on Hisar road too. “They were not the farmers but anti-social elements. This is not the right way of protest. The police administration should take action against such persons,” said Aditya, who is the great grandson of late former deputy prime minister Devi Lal.

Upset with the detention of agitators in Sirsa, farmers later blocked NH-9 which connects Dabwali to Delhi at three locations. Sources said they also blocked two more roads, demanding release of the protesters. Till late in the night, the administration was trying to convince farmers to lift the blockades. The detained were finally released hours later.

Meanwhile, in Fatehabad, protesters removed metal barricades put up by police as they marched towards a venue where Haryana Cooperation Minister Banwari Lal and Sirsa MP Sunita Duggal were attending a meeting of the BJP district executive. Sources said they managed to reach near the BJP office after removing police barricades even as the administration had appointed 12 magistrates to maintain law and order during the event.

At a BJP workers’ meeting in Jhajjar, heavy police force was deployed on Sunday. Farmers from neighbouring areas reached the town in tractor-trolleys, and protested there for four hours.

In Panipat, a few farmer activists were detained when they had gone to stage a protest against BJP leaders. They were released later.

In Ambala, a large number of protesters gathered on the Ambala-Saha road when they learnt that the district unit of the BJP was holding a function.

For the past seven months, farmers have been demanding withdrawal of three farm laws and introduction of a law to ensure MSP for their crops.