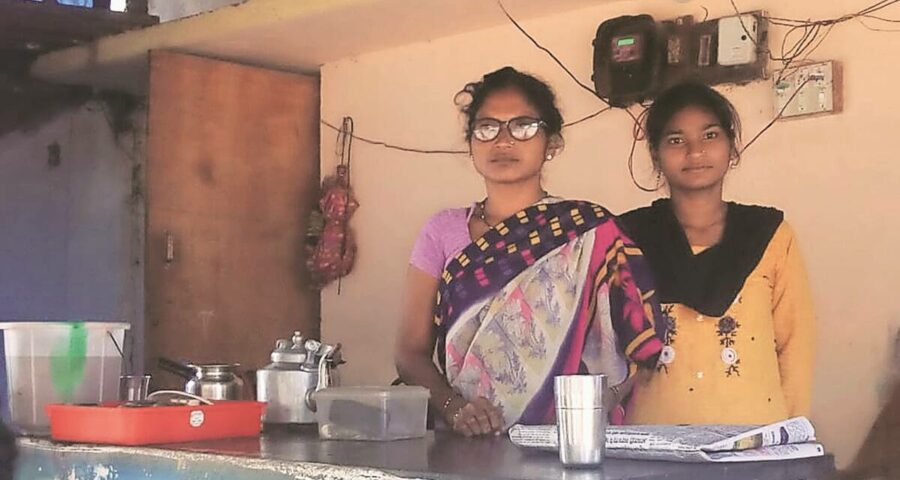 Since the Covid-19 outbreak, more than 1.4 lakh people have succumbed to the infection in the state. Hundreds of households lost their sole earning members, and are still struggling with grief and financial distress. Though the state government has declared several schemes to provide them social security, bereaved families are yet to get the benefits. Over 300 widows from rural Maharashtra have sent hand-written letters to Chief Minister Uddhav Thackeray seeking help. The Indian Express spoke to some of them.

‘Need money for treatment, what will happen to my children if I die?’

Vandana Waghmore (in picture, with children), 34, a resident of Majalgaon, Beed, used to walk 5-10 km daily. She now struggles to walk even half a kilometre. In May 2021, she was diagnosed with chronic kidney disease-her left kidney has failed. But she does not have the money to undergo dialysis on alternate days.
Her diagnosis came just two months after her husband, Anna Ram Waghmode, succumbed to Covid-19.

Anna Ram, a daily wage worker, was the sole working member in the family. The couple have two children.

Vandana has Rs 5,000 saved in her bank account as financial security. “I am not scared of dying. But I wonder what will happen to my children if I die,” she said. She has written to the CM seeking financial help for her treatment.

She said she hoped the state government would soon disburse the ex-gratia amount of Rs 50,000 so she can pay for her treatment.

Every time someone knocks at the door, Julekha Hanif Sayyad (in pic, with husband), a 70-year-old resident of Takali, Ahmednagar, gets scared. Local money lenders have been harassing her to pay the monthly interest of Rs 963 on her deceased husband’s debt.

In March 2021, her husband Sayyed Hanif Akbar took a loan of Rs 80,000 for a small scale business. Soon, the COVID second wave put paid to the business. Then on May 13 Akbar died of Covid-19 in the district hospital.

After being harassed by the money lenders, Julekha sold off her three goats. It helped her pay off Rs 20,000. “They would come to my house and threaten me,” she said.

Julekha has now fled to her sister’s house and has been staying there for four months.

“The government needs to give concessions to Covid widows on their debts,” said Julekha.

‘No money for school fees, don’t want son to drop out’

On April 19, when the state saw the peak of the pandemic, Seema Suresh Raysane (in pic, with husband and son) ran from one hospital to another to admit her husband, Suresh Jaganji Raysane. Due to unavailability of beds, he succumbed to Covid-19 in his house in Nagpur.

Suresh worked as an auto driver and the family stayed in a rented house. When the pandemic started in March 2020, followed by the national lockdown, he lost his livelihood. Thus he couldn’t pay his son’s school fees of Rs 38,000 in 2020.

Now, the school is pressuring Seema to pay Rs 76,000, including this year’s fees. Recently, a Mumbai-based surgeon, Dr Amit Thadani, helped the family with Rs 20,000.

“I can’t even shift my son to a government school as his school is refusing to give a transfer certificate until I pay the remaining amount of Rs 56,000,” said Seema.

Seema often gets epileptic seizures. And since the death of Suresh, her health has deteriorated. “I can’t even do a job due to my health condition. I don’t want my son to drop out, but I don’t have any money,” she said.

‘My husband left nothing for me and my 6 daughters’

Anita Surytal (in pic, with children), a 30-year-old, works 8-9 hours a day in a factory in Hingoli to earn Rs 200 daily. But that isn’t enough to feed her six daughters. Since her husband’s death in April due to Covid-19, they are mostly surviving on fermented rice.

“I was only 15 when my parents forced me into marriage. I had my first daughter when I was 16,” she said.

But as her husband, a daily wage earner, wanted a son, she gave birth every alternate year. After her husband’s death, the entire responsibility of feeding her children has fallen on her shoulders. “I don’t have support from my in-laws as I failed to give birth to a son,” she said.

Their hut is dilapidated. Every time it rains, they fear the roof might give way.

Anita plans to repair the hut once she gets the ex-gratia amount of Rs 50,000 from the government. “My husband has left us nothing,” she said.

Under Mission Vatsalya scheme, officers from the women and child department are supposed to help such needy widows. But like many others, Anita is yet to get their assistance.

Ayushi Roshan Mishra (in pic, with daughter), 19-year-old resident of Desaiganj, Gadchiroli, always got extra care from her father Roshan Mishra because of her autism. But since his death, Ayushi has been working with her mother in a tea stall.

“Due to financial constraints, I haven’t been able to pay the electricity bill for three months. Every time the officers come to cut the connection, I beg them not to do so,” said Rohini Roshan Mishra, Ayushi’s mother.

Roshan, a carpenter, died of Covid-19 on April 20. Within 10 days, his mother also succumbed to the infection.

“Somehow, I am trying to arrange for meals. But I had to stop my daughter’s medication due to monetary problems,” said Rohini.