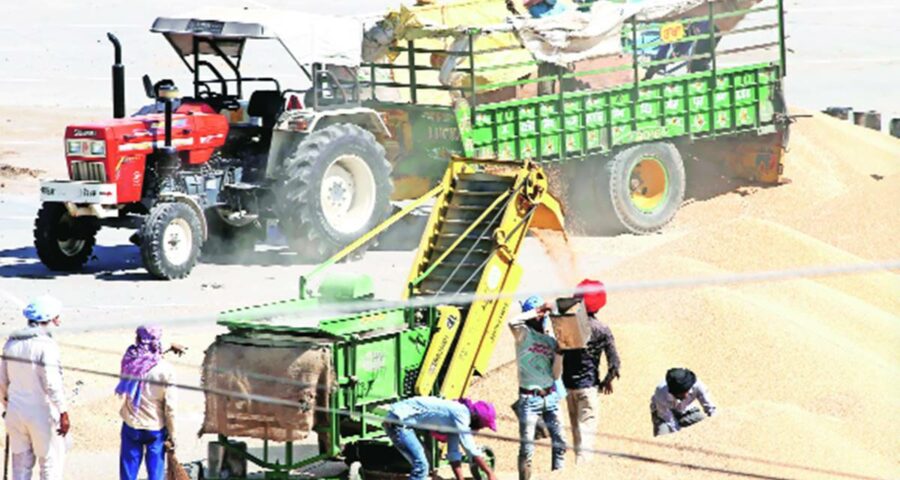 At least 44 trucks of wheat from UP will be beginning their journey back following a protest by the farmers who were miffed at wheat from outside the state making its way to Punjab for a processing unit in Ropar district. Farmers alleged that the wheat was brought from outside to get MSP benefits in the state. Three days after gangster-turned-politician Mukhtar Ansari’s jail transfer brought into focus the state of Uttar Pradesh and Punjab’s Ropar district, the two are in the spotlight again — only this time the issue concerns truckloads of wheat from UP meant for a Ropar processing unit.

At least 44 trucks of wheat from UP will be beginning their journey back following a protest by the farmers who were miffed at wheat from outside the state making its way to Punjab for a processing unit in Ropar district. Farmers alleged that the wheat was brought from outside to get MSP benefits in the state.

The high voltage drama, which started with farmers lodging a protest till late evening on Thursday and scaling it up to block the Chandigarh-Ropar road for over three hours on Friday, ended after Solkhian-based Megastar Food Limited gave an undertaking to purchase wheat from local mandis of Punjab and gave Rs 2.5 lakh in cash to protesting farmers as “social fund” for the “welfare of farmers”.

Established in the year 2013, Megastar Foods Limited, as per its website, “is a prominent producer and supplier of wheat flour, organic wheat flour and allied products in India”.

The handwritten undertaking on a company letter head with subject line “The wheat procurement” and signed by “Auth. Signatory” with initials was addressed to “The Secretary Market Committee Ropar.”

It read, “Dear Ma’am, In regard to the above cited subject we hereby undertake to return the disputed trucks back to the traders out of the Punjab state. We are also giving social fund of Rs 2,50,000 towards the welfare of farmers.”

It all started when Ropar unit president of Bharatiya Kisan Union (Kadian) Gurnam Singh, who was observing dharna against three farm laws at nearby toll plaza, went to have langar (community kitchen food) in gurdwara near the Megastar Foods and got suspicious over the presence of such large number of truck trailers carrying wheat, two days before Punjab was set to start procurement of the produce in its mandis.

Singh wasted no time to sound an alert and close ranks as activists of six farm organisations reached the site to sit on a dharna which continued till late Thursday evening before mandi board officials gave an assurance to take action on Friday morning.

“At about 11:30 am today, we blocked the road after the officials did not turn up. After that police and Mandi Board officials came and the district mandi officer said she cannot impose fine under any law. On Thursday, night she had assured us that fine will be imposed and action taken,” Gurnam said over phone, adding that “Centre was in connivance with the state government to send wheat from UP to Punjab”.

Gurnam added, “This has caused loss to Punjab farmers. Our procurement is delayed and when will such flour mills purchase our produce.”

Gurnam said the protesting farmers wanted police to register FIR, but the police officials who came at the spot said, “Parcha banda hi nahi (No case for FIR is made out).”

Linking this to assured MSP in Punjab, Gurnam alleged that “the wheat from UP was procured at the rate of Rs 1,327/quintal plus Rs 135/quintal freight charges. In Punjab, the wheat MSP is over Rs 1,900 per quintal.”

Ropar district mandi officer Bhajan Kaur, when contacted, said, “Maamla nibbar gaya (The issue was sorted out).” She said that the wheat was “purchased from the traders at a rate of Rs 1,900 per quintal.” She added, “I tried to explain to the protestors that the amount they were referring to was transportation charges, but they would not listen.”

Asked about the company paying Rs 2.5 lakh for the welfare of farmers, Kaur said, the company officials said they were “ready to do social service for farmers. They said they had been also doing that earlier for Delhi protests also.”

Ropar Senior Superintendent of Police Akhil Chaudhary said, “The matter was amicably solved. The police’s role was only to maintain law and order during the road blockade.” On Rs 2.5 lakh given by the company for welfare of farmers, BKU (Kadian) Ropar unit president Gurnam Singh said, “The money would be used for providing facilities like fans and langar to the protesting farmers at Delhi border. A decision on that will be taken on April 13 when there is call to have meetings to pay homage to martyrs of Jallianwala Bagh massacre. Every penny of the money will be accounted for.”

In Patiala, Shiromani Akali Dal (Democratic) senior vice president and former deputy speaker of Punjab Vidhan Sabha Bir Devinder Singh said, “I’m aghast to learn that around 50 truck trailers having the loaded capacity of 40 tonnes each, loaded with smuggled wheat from UP, impounded in Ropar district of Punjab in order to rob the MSP regime.”

Referring to “disturbing reports in the media” in this connection, Bir Devinder added: “Many more [truck trailers] are on their way to Punjab in order to misuse the MSP benefits.Such large scale movement of smuggled wheat from UP and Bihar is not possible without the implicit connivance of local arhtiyas or commission agents…Punjab Arhtiyas made false and fake exaggerated entries in their books against the name of the farmers and made staggering 700 crore profit by deceiving the system and betraying the genuine farmers of the legitimate benefits of MSP.”

In a written statement, Bir Devinder added, “What tangible action the state government has taken against those smugglers is anybody’s guess, but my credible sources reveals (sic) that they all were soon off the hook after paying handsome price to the powers that be.”

Meanwhile, Punjab government has filed FIRs against three firms trying to sell wheat in state mandis brought from outside the state.

Punjab Food, Civil Supplies and Consumer Affairs minister Bharat Bhushan Ashu in a written statement to media said that department team had found around 8,000 gunny bags in yard of M/s Babu Ram Ashok Kumar and Lakshmi Oil Mill in Grain Market, Bhatinda. “Upon further enquiry, it was found that the wheat had been procured from Uttar Pradesh and Rajasthan at lower prices and was to be sold at MSP here. Besides this, total of 17,000 bags have also been seized from godowns of these two firms,” said the minister.

The minister also stated that 8,000 to 9,000 wheat bags had also been recovered from Kishan Trading Company of Bugga Mandi in Ferozepur. He said cases had been filed against these firms.

Ashu said that “manipulation in the procurement of wheat by any trader and employee in the state would not be tolerated”.