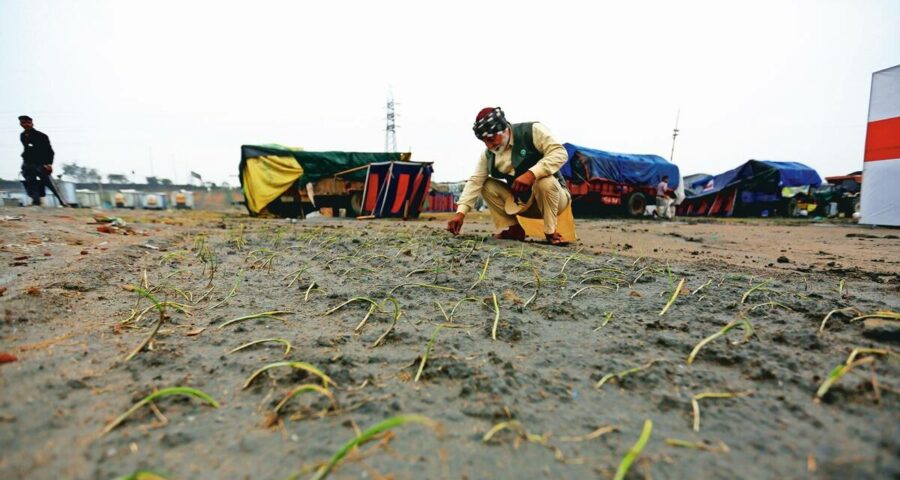 When farmers had arrived at Singhu and Tikri borders, authorities had asked them to move the protest to the Burari ground instead of heading towards Jantar Mantar or Ramlila Maidan. While most farmers then decided to remain put at the borders about 400 eventually moved to the Burari ground. 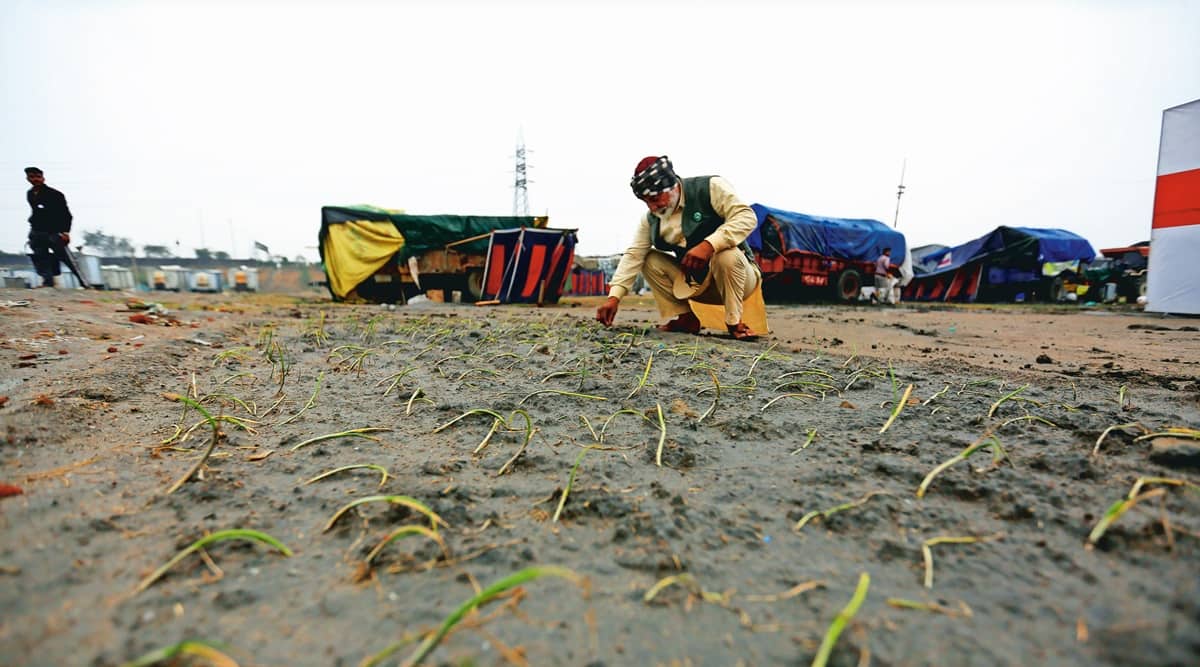 With small patches of onion, corn and a number of other vegetables, rows of marigold flowers, and a volleyball court, the Burari ground in Delhi that farmers had earlier called an ‘open jail’ has now evolved into a site fairly distinct from other protests at the borders, albeit much smaller in size.

When farmers had arrived at Singhu and Tikri borders, authorities had asked them to move the protest to the Burari ground instead of heading towards Jantar Mantar or Ramlila Maidan. While most farmers then decided to remain put at the borders — saying authorities wanted to push them into a corner — about 400 eventually moved to the Burari ground.

Pointing to a volleyball net tied between a branch and a tent, Jagdeep Singh (24) from Punjab’s Faridkot said on Tuesday, “A sewadar from Delhi donated this net to us 10 days ago. Since then, some of us gather to play in the evenings. Farmers cannot sit idle, it is in our blood to do something productive. For the same reason, a number of older farmers decided to make use of the land and grow a few vegetables.”

Rows of 12-day-old onion plants are being cultivated not far from the 40 tractors at the site. Said Gurudev Singh Manga (42): “They will take around 60 days to start yielding onions. It is symbolic of the fact that we will not move from here anytime soon.”

Gurudev and others from Ropar district in Punjab reached the site in the last week of November: “We keep visiting Singhu and Tikri, but we will not go anywhere as it is easier to march to Delhi from here.”

At another corner of the site, Jaskaran Singh Kahan (58) and his family from Firozpur tend to the rows of corn, spinach, tomato and onion: “There are 15 corn trees and two rows each of other vegetables. Once it becomes a bit warmer, we will grow rice and a few more vegetables. That way, we do not have to depend on resources from outside.”

He added that some were grown from leftover vegetables, while some seeds and plants were purchased from a nursery nearby. He said that they will be grown organically as the quality of the mud is good.

While sporadic rains have been a boon for these crops, they have posed a new set of challenges. Many farmers dug trenches around their tents and tractors when they were expecting rain so water wouldn’t accumulate where they sleep.

For others, who have set up bigger tents with cloth on the ground, this was not an option. Pinderjeet Kaur (32), who joined her father-in-law at the protest, came to Delhi in a private vehicle along with her husband and two children. She said, “Ten of us, including the children, sleep on three mattresses, which are now wet because of the rain… the roof of the tents keep flying at night as well.” She said nobody has given them a fresh set of mattresses and that they would have to wait for them to dry.

Meanwhile, groups of farmers worked through the day to set up sheds for the two langars at the site. Jaspaal Singh (58) from Faridkot said a number of items come in from Singhu and Tikri borders. “When we need something, we tap our networks there. Apart from that, people from Delhi come to our aid. The day it rained, a few sewadaars came and gave us material to set up tents, including asbestos, logs of wood, nails and hammers.”

As the evening set in, both langars had been sheltered from the drizzle, and farmers said they no longer had to worry about cooking in the rain.