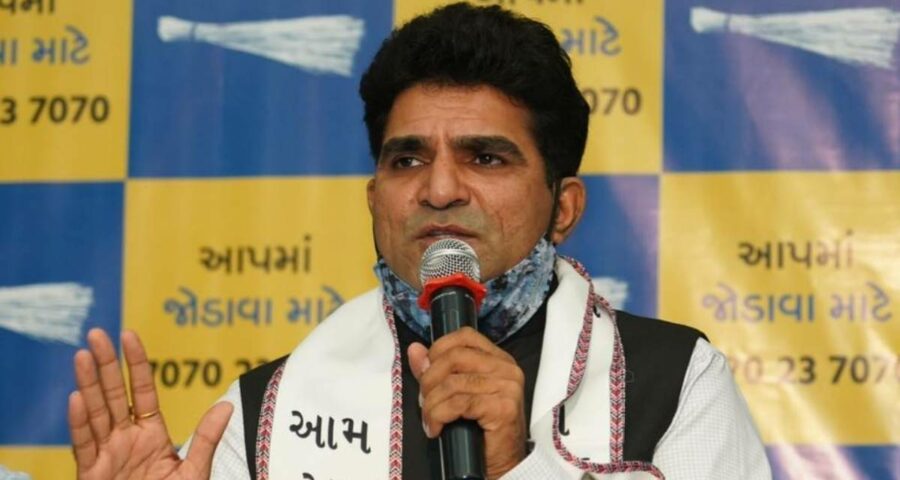 Terming it an insult to the Hindus in the state, the Gujarat unit of the Aam Aadmi Party on Friday protested the demolition of a temple by the BJP-ruled Surat Municipal Corporation (SMC) and sought an apology from Chief Minister Vijay Rupani.

The civic body had, under heavy police bandobast, demolished the Ramdev Peer Temple built on the roadside in the city’s Kapodra area on Wednesday as part of an anti-encroachment drive for a metro rail project.

A video of the demolition had surfaced on social media in which a priest is seen crying as JCB machines raze the temple down. At their press conference in Ahmedabad, AAP leaders also screened the viral video.

“Today, the Hindu samaj of Gujarat has been hurt and we can see the priest crying during the demolition drive. You didn’t bother to ask the priests or Hindu community leaders before the demolition. When workers of the Vishwa Hindu Parishad tried to protest, you used police to use force, detain them and intimidate them with threats of arrest. Even the British did not dare to touch the temples and Even Mahmud Ghaznavi did not stoop to this extent. Then how come the BJP in Gujarat managed to do it? Our ancestors have given their lives for our temples,” Gadhvi said.

Activists of the Vishwa Hindu Parishad and the Bajrang Dal had protested at the demolition site after which they were detained by the police.

The Bharatiya Janata Party is in power in the Surat municipal corporation with AAP as the Opposition. “The manner in which the BJP government in Surat demolished the symbol of faith with the help of local administration and police is an insult to Hindus not just in Gujarat but also across the country. What have you done for the temples in the past? If you are saying that the temple was an encroachment and illegal then how many BJP leaders have illegal houses? You didn’t find other illegal places in Gujarat that you had to offend the Hindu sentiments,” the AAP leader went on to say.

“We demand that the Gujarat Chief Minister and BJP president apologise for the demolition and make alternate arrangements for another Ramdev Peer temple in the same area. If our demand is not met, then the AAP promises that it will fight for our symbol of devotion,” Gadhvi added.