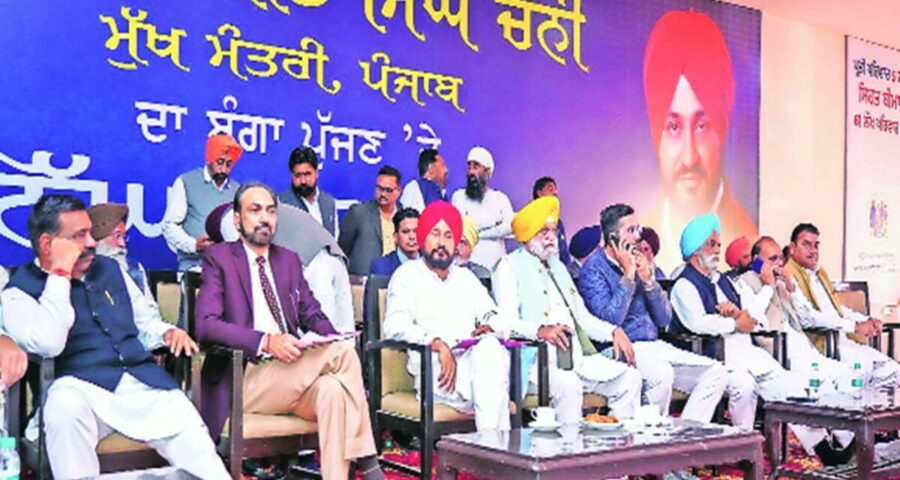 Training guns against AAP leader and Delhi Chief Minister Arvind Kejriwal, Channi described him as “a rumour monger who is least bothered about the state”. Punjab Chief Minister Charanjeet Singh Channi Tuesday showered effusive praise on his principal secretary Hussan Lal at a public rally in what is being seen as a hint that the Congress may field the IAS officer from the Banga Assembly seat in next year’s election. Banga is part of Nawanshahr, the district from where Hussan Lal hails. The IAS officer too addressed the rally and demanded various projects for the constituency.

He said that Lal has prepared a list of villages where development works need to be done. “I am announcing grants for them and now we will also give you the candidate of your choice,” he added.

Earlier, in his brief address Lal praised Channi for showering grants on the district. Seeking to strike an emotional chord with people, Lal recalled his days of struggle overcoming which he rose to prominence by clearing the coveted civil services exam. Lal said that the state government had already chalked out a blueprint for ensuring holistic development of the district, especially Banga, in the coming days.
Meanwhile, accusing the Akalis of ignoring the interests of the Scheduled Castes, Channi said that the SAD have “an unholy alliance with the BSP and have deliberately allotted them weak seats to contest”. He alleged that the aim of the Akalis is to give advantage to the BJP on these seats.

Training guns against AAP leader and Delhi Chief Minister Arvind Kejriwal, Channi described him as “a rumour monger who is least bothered about the state”. He said that Kejriwal is only making hollow promises whereas his government is delivering good governance and clean administration to the people.

He said that an “unholy nexus of politicians across party lines” had excluded common man from benefits. He said that the members of this elite group have a common bond in the form of their own vested interests to loot the state. “They had been willfully doing this by enjoying the fruits of power in a game of musical chairs where the ruler changes after every five years but power remains in their hands. However now this nexus has been broken and the power is with the common man,” he said.

He said that his government has already reined-in the sand and transport mafia in the state while adding that next turn is of the cable mafia.

Who is Hussan Lal

A resident of Raipur Nangal village in Nawanshahr, Hussan Lal was born on August 1, 1962. Lal, a 1995-batch IAS officer, was appointed the principal secretary to new Punjab chief minister Charanjit Singh Channi just after Channi took oath. He came quite close to the CM during his tenure as principal secretary of tourism department when Channi was the minister of tourism and cultural affairs under Captain Amarinder Singh’s Government.

During the pandemic, Lal remained principal secretary health before he was appointed Punjab health secretary, principal secretary investment promotion, industries & commerce and information technology. Hussan Lal’s pro-public style of working has gained him a strature of a good officer.