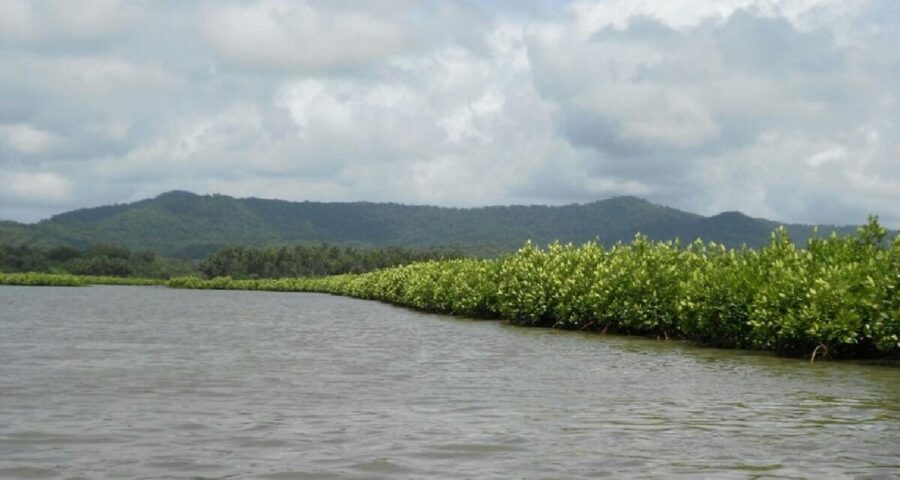 Aghanashini River in central Uttara Kannada district of Karnataka originates in the Western Ghats and flows westward towards Arabian Sea and a major part of its course flows through the forested gorges and valleys. ENVIS Centre & Energy and Wetlands Research Group of the Indian Institute of Science (IISc) prepared a proposal for the declaration of Aghanashini estuary as a Ramsar wetland site of international importance. According to sources, the state government may pitch the estuary to the Centre to get the prestigious tag. The other contender in the list is Ranganathittu Bird Sanctuary in Mandya district of Karnataka.

Aghanashini River in central Uttara Kannada district of Karnataka originates in the Western Ghats and flows westward towards Arabian Sea and a major part of its course flows through the forested gorges and valleys.

Aghanashini estuarine landforms not only accommodate diverse ecosystem functions and human activities but also mediate flood and erosion risks that are expected to increase with climate change.

“Having no dams and no notable industrial establishments or major townships along its banks, Aghanashini river may be considered one of the most pristine along the west coast. The river meets the sea at Aghanashini village of Kumta taluk. The high productivity of the estuary is because the river water carries large quantities of organic materials from the forests in the catchment area of the Western Ghats and deposits the same in the estuary. The debris becomes an important base for food chains operating in the estuary,” the IISc report states.

It adds, “The rich mangrove vegetation of the estuary plays a significant role in nutrient supply for the diverse faunal community and provide shelter for birds and act as nurseries for many species of fishes and prawns. The rich bird community (over 120 species)associated with the estuary contributes to the nutrient cycling through their potash and nitrogen rich castings. The constant churning and circulation of waters due to flow of fresh water from one side and the tidal influx from the Arabian Sea oxygenates the water and circulates the nutrients.”

One of the co-authors of the report and a scientist at IISc, Dr T V Ramachandra, said the move would aid towards comprehensive management of the estuary, in relation to coastal environmental integrity and protection of dependent biota and people’s livelihoods.

The IISc report mentions that overfishing is one of the major threats causing degradation of the estuary. “It has not only affected estuary-based livelihoods but is also causing upsets in the marine fishery sector as the nursery function of the estuary for marine organisms is getting undermined in the absence of any sustainable management strategies. Pressure from sand mining on the estuary has been mounting over the last several years,” the report read.

India has 46 ramsar site locations but none of them is in Karnataka.

India is a signatory to the Ramsar Convention signed on February 2, 1971. The aim of the Ramsar list is to develop and maintain an international network of wetlands which are important for the conservation of global biological diversity and for sustaining human life through the maintenance of their ecosystem components, processes and benefits. Wetlands declared as Ramsar sites are protected under strict guidelines of the convention.