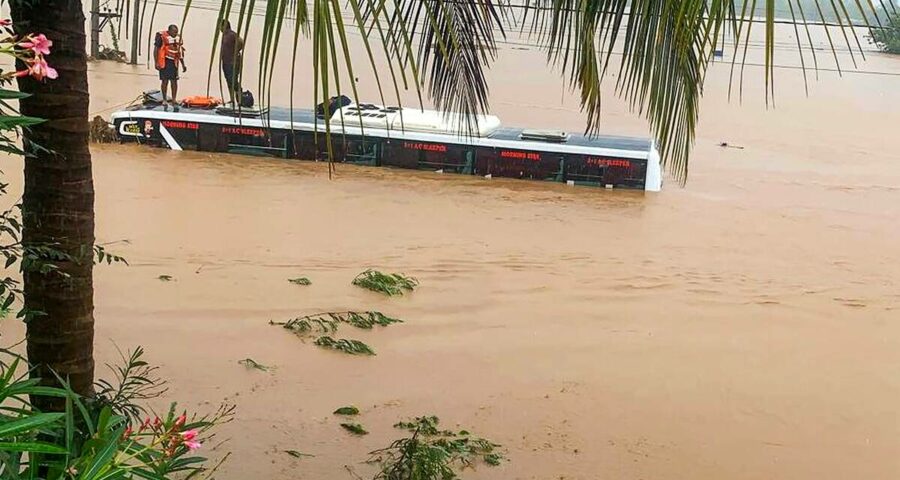 A heavy downpour of up to 20 cm wrecked havoc in three Rayalaseema districts and one south coastal district in Andhra Pradesh, leaving at least eight people dead on Friday.

Prime Minister Narendra Modi spoke to Chief Minister Y S Jagan Mohan Reddy over phone and enquired about the situation and promised all help to the state.

The Chief Minister will undertake an aerial survey of the flood-hit districts on Saturday, the CMO said in a release.

Swollen rivers and rivulets caused a huge deluge in the districts, cutting off roads at some places and throwing life out of gear.

In many places, roads turned into canals and swept vehicles away. Though the Tirupati International Airport at Renigunta was re-opened for flight operations on Friday, the two ghat roads to Tirumala Hills remained shut.

The stairway leading to Tirumala from Alipiri suffered heavy damage due to landslips and flooding, shutting it down for pilgrims who normally trek the Hills.

The Chief Minister asked the Tirumala Tirupati Devasthanam officials to make arrangements for free accommodation and food for the stranded pilgrims on the Hills.

In Rajampeta constituency in Kadapa district, at least five people were killed in a flash flood in the Cheyyeru rivulet while 12 more were still missing.

Kadapa Collector Vijaya Rama Raju told PTI that eight people in all were killed in the district in the floods.

The conductor of a State Road Transport Corporation bus and two other passengers met with a watery grave in Kadapa district as the vehicle tilted in the flood. Two others in the bus were rescued, according to an official release.

In neighbouring Anantapuramu district, 10 people stranded in the Chitravati river flood at Veldurthi village were rescued by the Indian Air Force personnel, who specially flew in from Yelahanka Air Force Station in Karnataka.

The IAF team carried out a winching operation using a Mi-17 helicopter to rescue the ten people, who were stuck in a JCB. The JCB had earlier in the afternoon gone to rescue four people in a car caught in the Chitravati flood but, as the flood turned menacing, six of those in it and the four car passengers got stuck.

The Anantapuramu district administration sent an SOS to the IAF, following which the rescue operation was carried out successfully.

In Kadapa district, 33 relief camps have been opened and 1,200 persons were lodged in them.

The Chief Minister spoke with Collectors of the flood-hit districts and asked them to step up rescue and relief measures.

The South Central Railway said 11 passenger and Express trains were cancelled, five partially cancelled, 27 diverted via other routes and one more rescheduled because of the deluge.