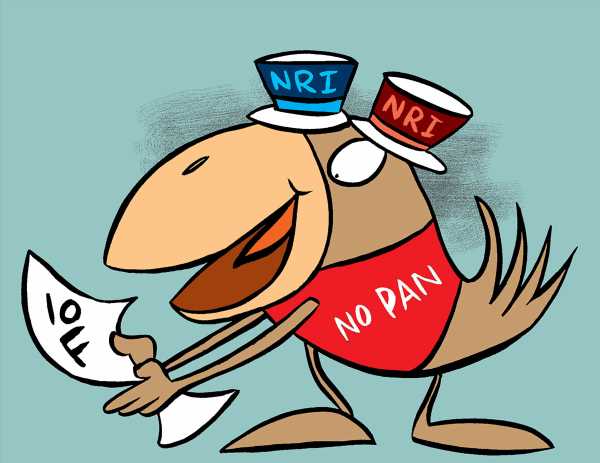 ‘Many non-resident taxpayers faced issues in filing Form 10F since the portal didn’t allow those who didn’t have PAN to file the form.’

The Central Board of Direct Taxes (CBDT) has offered one-time relief to non-resident individuals (NRIs) who don’t have a permanent account number (PAN) by allowing them to file Form 10F manually till March 31, 2023.

The CBDT had issued a notification in July, making it mandatory for non-resident taxpayers to file Form 10F electronically on the income tax (I-T) e-filing portal if they wanted to claim the benefit of lower TDS (Tax Deducted at Source).

Income earned by an NRI in India is subject to TDS under the I-T Act, 1961.

“Owing to the practical challenges faced by them, the CBDT has issued the latest notification exempting those who don’t have a PAN, and are not required to have one under the provisions of the I-T Act, from the mandatory e-filing of Form 10F till March 31, 2023.”

The Government of India has signed the Double Taxation Avoidance Agreement (DTAA) with the governments of foreign countries to help NRI taxpayers avoid paying double taxes on the same income in both the countries.

If certain prescribed details are not available in the TRC, then the non-resident taxpayer is required to furnish additional documents and information in Form 10F.

TRC is a certificate issued by the revenue authority of the NRI’s country of residence certifying that the person is a tax resident of that country.

“According to Indian I-T law, a non-resident person must obtain a TRC from the government of the country or the specified territory of which he claims to be a resident,” says Pallav Pradyumn Narang, partner, CNK

Indian payers request the non-resident payee to provide them with a copy of the TRC.

“On the basis of the TRC, the Indian payer can apply the beneficial provisions of the tax treaty to determine the non-resident’s taxability in India,” says Sumit Mangal, partner, Luthra and Luthra Law Offices India.

“The Indian courts have time and again emphasised the relevance of the TRC for a non-resident to claim treaty benefits.”

An NRI taxpayer’s TRC must have the following details for him to avail the benefit of DTAA: Name, address, nationality, residential status for tax purposes, taxpayer’s status (individual, firm, etc), Tax Identification Number (TIN) or any unique number that identifies the person as a tax resident by that country’s government, and period for which the certificate is valid.

Use TRC in lieu of Form 10F

Use of Form 10F can be avoided if the required information is provided in the TRC.

“Usually, nationality and the tax identification number are mentioned,” says Ankit Jain, Partner, Ved Jain & Associates. “If the status, period of validity, and address are also mentioned on the TRC, then submitting Form 10F is not required.”

Luthra adds, “TRCs issued by the revenue authorities of some of the popular destinations that invest substantially in India (like Mauritius and Singapore) contain the prescribed particulars. Non-residents from those countries may not be required to provide Form 10F.”

What should you do?

Non-resident taxpayers who need to use Form 10F to avail DTAA benefits should file it manually by March 31, 2023.

They should use the time window provided by the tax authorities to apply for and obtain PAN.

Non-resident taxpayers may be required to substantiate information they provide in Form 10F.

Have the relevant documents ready in case the tax authorities demand them.