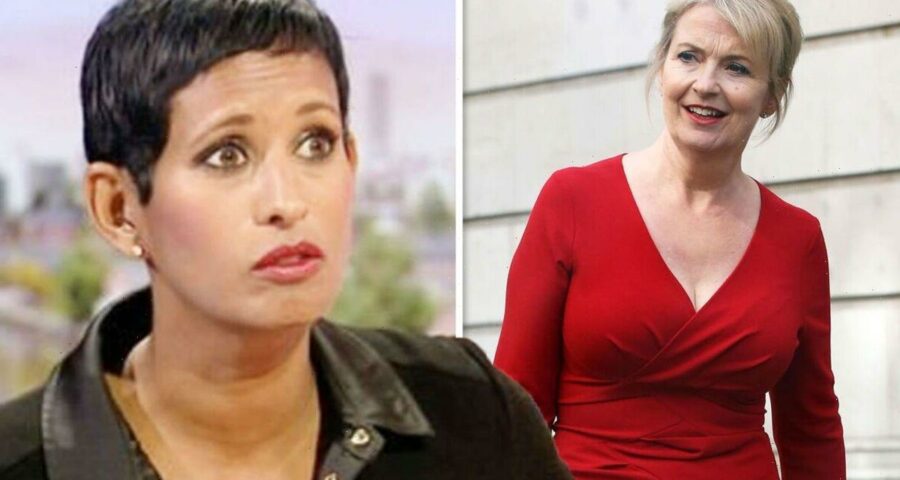 Naga Munchetty and Carol Kirkwood get nostalgic about coins

Carol Kirkwood has been a staple on BBC Breakfast for more than two decades presenting the weather forecast to the nation. The Scottish-born meteorologist and her colleague Naga Munchetty are known for their on-screen jibes.

Just last month, Naga appeared to take a dig at the 60-year-old weather presenter’s age and called her “really stern” in a cheeky spat over the Christmas Day forecast.

The BBC star began by saying: “Carol’s taking a look at the weather, of course, for us this morning.

“Carol… I think we’re never allowed to ask you about snow on Christmas Day. You always kind of have that really stern look whenever I ask.”

She then turned to Charlie to back her up asking: “Doesn’t she?”

But the weather presenter cheekily hit back at her co-star in an on-air jibe.

Carol reacted with a subtle smirk as she replied: “Naga, I prefer it when you ask me about the snow on Christmas Day on Boxing Day, to be honest, but hey ho!”

The weather star has since addressed the pair’s relationship and admitted their back and forths are just “banter”.

The BBC favourite revealed she is often asked by fans whether she and Naga get on.

To which she replied: “We absolutely do.

“I love Naga and we just have banter. I love the camaraderie between us and everyone. It’s a good, fun job.”

Carol – who announced her engagement to fiancé Steve last year – also touched on being referred to as a sex symbol.

When quizzed about how she feels about her sex symbol status, she continued to The Sun: “Can you give me their names and addresses please? No, I’m the girl next door. I’m certainly not a sex symbol.”

Carol went on: “Seriously, I would never see myself in that light in a million years!”

She added: “I try to look smart and I still have to do my own hair and make-up in the mornings – which I have to say is hit and miss.

“Some days I don’t go out looking spectacular because my hair won’t do what I want, but it’s an important part of the job.”

Her comments come as BBC Breakfast approaches their 40th anniversary.

Meanwhile, viewers’ favourite weather forecaster is set to tie the knot after she announced her engagement news back in May.

The TV presenter is keen to protect the privacy of her fiancee and so not a huge amount is known publicly about him.

Carol was previously married to her former husband Jimmy Kirkwood but the couple called it quits in 2008 after a decade together.

BBC Breakfast airs daily on BBC One at 6am.