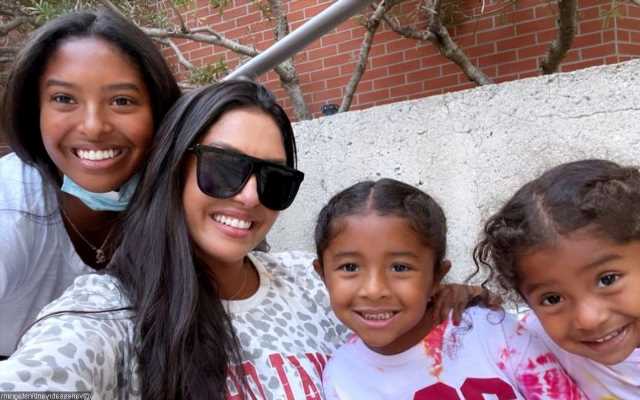 In the note accompanying a family photo taken before dropping off her eldest daughter at her campus, the widow of late NBA star Kobe Bryant admits that she has a bittersweet moment.

AceShowbiz –Vanessa Bryant has a mixed feeling about her eldest daughter’s latest milestone. The mother of four had a bittersweet moment when she dropped off her daughter Natalia Bryant at the University of Southern California as she admitted that “it was rough.”

Making use of her Instagram account on Wednesday, August 18, the 39-year-old shared a family photo before dropping off her 18-year-old daughter Natalia at her campus in Los Angeles. The image saw her smiling at the camera alongside Natalia, 4-year-old Bianca and 2-year-old Capri. In the caption, she emotionally wrote, “Today was rough.”

“This was before the tears came down,” Vanessa continued explaining in her note. She went on to cheer her eldest daughter as she wrote, “Missing [two fingers emoji] forever. I love you @nataliabryant BE EPIC and FIGHT ON.” She also included red and yellow heart emojis.

Vanessa’s two fingers emoji in her caption seemingly refers to her 13-year daughter Gianna, who passed away in a tragic helicopter crash in January that also took Kobe Bryant‘s and seven other lives. Her post has since been flooded with outpouring support for Natalia from her fans and followers.

Olympic volleyball star Kerri Walsh Jennings was among those who commented on the post. She wrote, “I can not imagine. Love to your heart. To Your oldest baby girls’ too.” Former USC quarterback Matt Leinart added, “Fight on!!!! @nataliabryant @vanessabryant,” adding heart and praise hands emojis.

Natalia graduated from Sage Hill High School in June. Celebrating her education milestone was her mom Vanessa. At the time, she took to her Instagram account to share a sweet video of Natalia’s name being called as she took the stage in her cap and gown and received her diploma.

“Congratulations Natalia! We will ALL be with you every step of the way @nataliabryant,” Vanessa captioned the footage, which also saw her cheering on. Before her eldest daughter got her diploma, the proud mom shared a photo of her daughter wearing her cap and gown. “Daddy, Mommy, Gigi, Bianka and Capri are so proud of you @nataliabryant!!! [love],” she gushed.

Vanessa also posted a video of school staff at Sage Hill School giving Natalia the school’s Compassion Award. “This made me tear up. Mommy and daddy are so proud of you @nataliabryant,” she penned alongside the video.