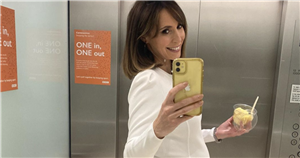 Alex Jones has revealed she has packed her hospital bag ready to prepare her third child.

The One Show host took to social media on Tuesday to share that she was making sure she was prepared for her new arrival later in the year.

Speaking to her 304,000 Instagram followers, the Welsh beauty said: "I thought I should probably start thinking about a hospital bag. Left it a bit late. I just cannot remember what's supposed to go in, even though this is my third." She then showed how she had decided to pack blankets and dummies for the little one and some comfy-looking pyjamas, toiletries, flip flops and nursing bras for herself.

Alex also told how the blankets she packed had also been used to bring her two sons Teddy, four, and Kit, two, home from hospital – with one of them being gifted to her by fellow BBC presenter Gabby Logan.

The gorgeous brunette explained that her and her husband Charlie know their daughter "is going to be quite small," so has packed baby grows in the size "tiny baby." Earlier this month, Alex broke down in tears as she presented her last episode of The One Show before heading off on maternity leave.

Things became emotional as she was shown a video that had been made by her fans, friends and family as they wished her luck.

The video included messages from Alex's husband, her parents, Jason Donavan and other colleagues. Alex's co-host Gethin Jones also read out a message from a viewer, Pauline, who said that she had helped to ease the "trials and tribulations" of the past year amid the pandemic.

She said: "Oh you know me I cry over the slightest thing. Honestly being here is just superb, I loved doing it every night and it's really hard to go away.

"I know it's the third one but it's really hard to go away."

She continued to say to viewers: "I just want to say, if I've missed anybody a big thank you to everybody who's knitted lovely little gifts for the baby.

"There's about 24 cardigans, she's gonna be in cardigan heaven!"

For the latest on Alex's pregnancy journey, make sure you sign up to OK!'s daily newsletter.