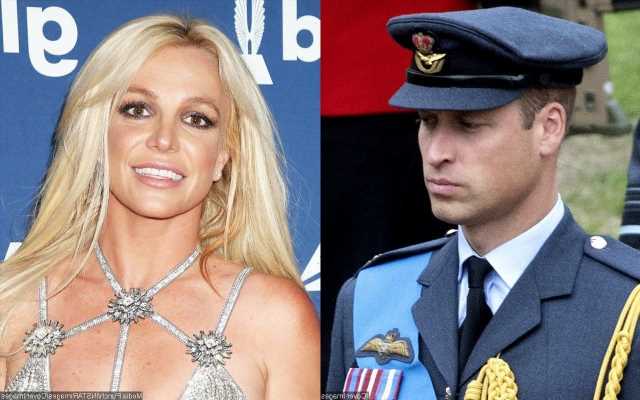 After a Twitter user brings up the Princess of Pop’s claims in a 2002 interview that the Duke of Sussex once stood her up, people weigh in on how she could have been ‘the queen of England.’

AceShowbiz -Prince William and Britney Spears‘ past relationship was brought up as the royal ascends to become the heir apparent to the British throne in the wake of his grandmother Queen Elizabeth II’s passing. Social media users are talking about how the so-called Princess of Pop could have been “the queen of England” had things gone different.

“britney spears is the princess of pop, but never forget that if things had gone a little differently, she could have also been the queen of england,” a Twitter user posted on Tuesday, September 20 along with a screenshot of a headline about William and Britney’s alleged “cyber relationship” before he met Kate Middleton.

The same user followed it up with a meme that put together a clip of Britney dancing with a picture of Buckingham Palace. “think about the instagram videos that could’ve been,” he added, prompting others to weigh in on it.

Sharing the same imagination, another user commented on the original tweet, “imagine Britney doing her little dance routines twirling around the castle with messy hair and her yellow crop top SHE CAN NEVER FOLLOW THE ROYAL PROTOCOL EVEN IF HER LIFE DEPENDS ON IT I FEAR.”

Another corrected the notion that Britney could have been “the queen of England” as saying, “Technically she would be a Royal Consort not a Queen as she is sadly a commoner.” A third thinks it’s the best for Britney to not date William as noting, “Sorry but she dodged a bullet right here. I’m afraid they would’ve done something to her if she really married him…”

Some others responded by bringing up Rihanna‘s past interaction with Prince Harry. “what about rihanna at one time being into prince harry?” one person said, including a photo of the Barbadian singer and the prince smiling while having a conversation. Another echoed the sentiment, “We were so close to getting Countess Rihanna too..”

Royal biographer Christopher Andersen revealed in his book “Brothers and Wives: Inside the Private Lives of William, Kate, Harry and Meghan” that William and Britney had a “cyber relationship” prior to him dating Kate. “[William and Spears] tried to get together back when they were young,” he claimed.

Christopher added that though “there may have been phone conversations,” he didn’t “recall that they ever actually managed to get together during that period.”

Britney also talked about briefly meeting the prince back in 2002. In an interview for a British talk show, the singer said she had been corresponding with the prince via e-mail, and invited him to visit her and perhaps go for a meal, but it never happened.

She noted though that it was just a “friendly” interaction that was “blown out of proportion.” She went on sharing, “We exchanged e-mails for a little bit. He was supposed to come and see me somewhere, but it didn’t work out.”