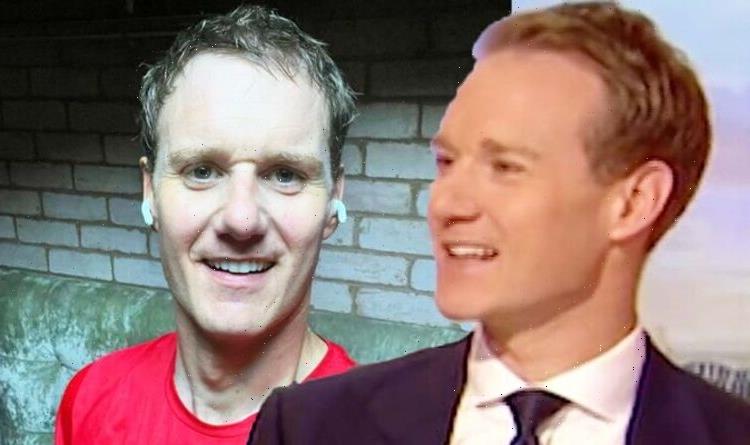 BBC Breakfast: Dan Walker recalls the Queen cutting him off

Dan Walker, 44, has recently come back from a city break with his wife and three children in Rome. The BBC Breakfast star logged onto his Twitter platform today to give fans an update on how he is returning to his usual home activities.

He shared a picture of himself sweating following his workout in view of his 750,000 followers.

The broadcaster captioned the snap: “Trying to smile after a sweaty little bike session.”

Dan returned today to his presenting duties on BBC Breakfast following his half term getaway.

During the instalment, Dan recounted how he was once cut off from the Queen after meeting her for the first time and trying to tell her a story.

Dan and his colleague Sally Nugent had been discussing the news that the monarch had tested positive for coronavirus on Sunday.

The Queen highlighted in a statement she had mild and “cold” like symptoms and would be carrying out “light” duties.

In light of the health update, Dan revisited his first time meeting the Queen as he confessed she cut him off mid-story.

The presenters had been looking through the national headlines of newspapers, with many of the front pages covering the Queen’s news.

The Sun’s headline read “HRH to WFH”, to which Sally noted: “Work from home, of course, the Queen is her majesty, isn’t she?”

“When she came and opened up the new studios in Salford, I had to meet her and welcome her in.

“I was briefed for about 14 years beforehand about what to say and what not to say, and they were very clear on ‘Her Majesty’.

“You never lift your hand until she raises hers to shake yours.”

Sally enquired: “Do you speak first?”

“No, you’re not allowed to say anything,” Dan quipped.

“No, but it was very nice, she turned up early, and you can imagine the sort of panic and pandemonium when she came in.

“We had a lovely little chat, I had nearly three minutes with her,” Dan went on.

Recalling the situation, Dan continued: “But I was in the middle of a story when it was time to move on, and she just left!”

Sally chimed in: “Oh, she cut you off in the middle of a story!”