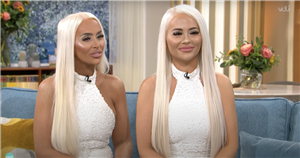 This Morning left viewers stunned on Monday as twins Daisy and Dolly discussed spending £140,000 on identical surgeries to look like each other.

Sporting bleached blond hair and tanned skin, the 25-year-olds spoke to visibly shocked hosts Holly Willoughby and Philip Schofield about having undergone several procedures together since the age of 18, starting off with lip fillers.

“Straight away we liked the way our lips looked when they were fuller and we did think, ‘what else can we get next?’” Daisy said.

Identical nose and boob jobs followed, with the surgeries being completed all in the same day, by the same surgeon.

“I think we both didn’t feel confident and getting things done together, we have that support as well,” Daisy added. “We both feel more confident in the way we look.”

The young women went onto reveal the most drastic surgeries they’ve booked yet – ‘designer vaginas’.

Dolly has had the procedure, known medically as a labiaplasty, but Daisy is yet to, due to Covid restrictions.

Perhaps surprisingly, the pair insisted they haven't undergone the identical surgeries in a bid to look identical.

“We both have that insecurity. It’s not about looking exactly the same,” Daisy said.

When Philip questioned the hesitance in the twins’ answers at times, it became apparent that the sisters weren’t exactly on the same page when it came to all cosmetic procedures.

“We do want to look similar and we want the same surgeries, but she’s a bit more extreme than me,” Daisy confessed.

Dolly wants a Brazilian Butt Lift – one of the more dangerous surgeries in which 1 in 3,000 patients are estimated to die, putting sister Daisy off from the procedure altogether.

“We have similar beauty ideals but not completely,” Dolly told the show's hosts. “I’m more of an extreme ideal.”

Sitting beside the twins was their mother, Christina, who revealed how her daughters’ surgeries have impacted her life.

“It’s very difficult as a mum because I believe they were beautiful before they had all these procedures,” she said.

“They got bullied at school and they didn’t feel too good about themselves. Social media has a big impact.

“To be honest, as a parent, you just want your children to be happy and healthy. They weren’t happy beforehand and they are much happier now, but I do have concerns about if they go to pursue any further procedures.

“I’m against that – at what point does it stop?”

The twins fund the procedures with money they earned working as strippers before the pandemic, and cash from an OnlyFans page they have together.