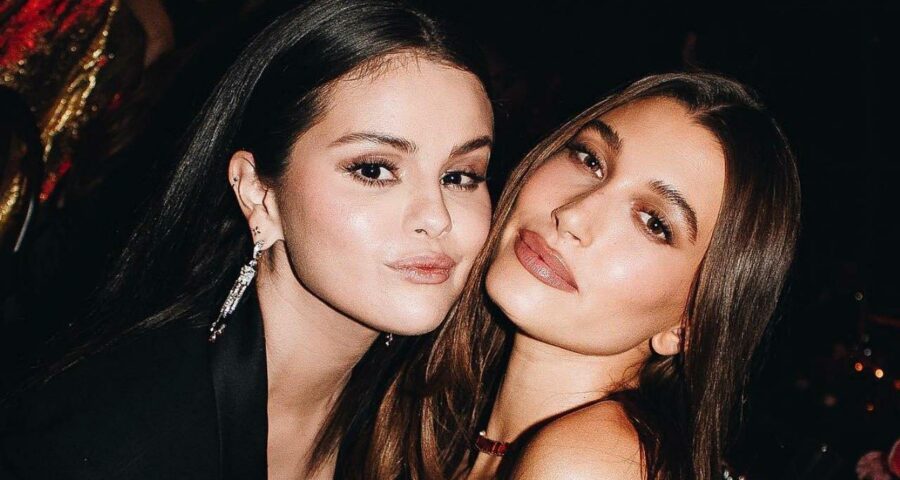 Prior to looking to be on good terms, Hailey addressed rumors that she ‘stole’ her now-husband from his ex-girlfriend during an appearance on the ‘Call Her Daddy’ podcast.

AceShowbiz –Selena Gomez and Hailey Baldwin are making it clear that there’s no bad blood between them. The duo has squashed rumors of Justin Bieber drama by sweetly posing for a very first photo together.

The singer/actress and the model joined forces at the Academy Museum of Motion Pictures’ 2nd annual gala Saturday night, October 15 in Los Angeles. When posing for an impromptu photo opp, the two looked to be on good terms as they were all smiles.

In one of the snapshots, which were taken by photographer Tyrell Hampton, the girls have their cheeks pressed together and are both looking stunning in the camera flash. Hailey liked the image from her Instagram account after Tyrell posted it. In another image, they can be seen embracing each other.

The images came just a few weeks after the entire saga was brought up again during an interview with Hailey on the “Call Her Daddy” podcast in September. There have been rumors that the timeline of her relationship with Justin overlapped with Selena’s, which she denied.

“When him [Justin] and I ever started like hooking up or like anything of that sort, he was not ever in a relationship ever, at any point,” the 25-year-old model said. “It’s not my character to mess with someone’s relationship.”

Hailey continued, “A lot of the hate, and the perpetuation, comes from the misperception, ‘Oh, you stole him.’ It comes from the fact that they wished he had ended up with someone else and that’s fine.” She added, “You can wish that all you want but that’s just not the case.”

Hailey said of Justin’s relationship with Selena, “It’s hard for me to talk about this because I don’t want to talk on either one of their behalf, again, because it was their relationship, and I honestly respect that very deeply.”

“I just feel like there’s a little bit of that anxiety of people will probably take it the wrong way or I just don’t want to say something that is being disrespectful or bringing up something that can stir up feelings for someone,” the daughter of Stephen Baldwin, who insisted that “there’s no drama,” went on adding. “I know that we’re just all so moved on from any type of drama, and I’m so happy for that so I get nervous about talking about it because I don’t want to like stir anything up or bring anything up that is going to be like a thing.”

Following the bombshell podcast, Selena did a TikTok Live during which she commented on fan’s response to the former love triangle, saying, “Some of the things that I don’t even need to be aware of are just vile and disgusting, and it’s not fair, and no one, ever, should be spoken to in the manner that I’ve seen.” The “Only Murders in the Building” star ultimately asked her followers to “be kind.”