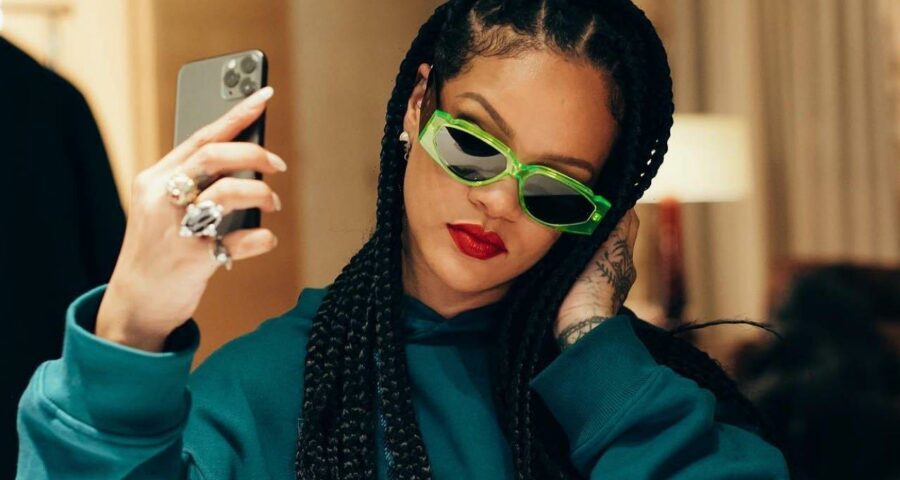 The Fenty Beauty founder welcomed her first child with her rapper boyfriend A$AP Rocky in May, but has been keeping details of the baby boy under tight wraps.

AceShowbiz – Rihanna, who has been shielding her son from the public and media since welcoming him back in May, may have dropped a hint at the baby’s name. The Barbadian songstress created a buzz when she stepped out over the weekend with what appears to be a statement necklace.

The 34-year-old singer stepped out in Los Angeles on Saturday, October 8, during which she rocked an oversized silver football jersey with the number “25” on it. While her top seemed to tease her upcoming performance at the Super Bowl Halftime Show, her jewelry might give a hint at her son’s name.

For the outing, Rih wore a smorgasbord of necklaces, including one of the letter “D”. Neither her nor A$AP Rocky‘s real names are associated with the letter, so it could be a nod to their four-month-old son.

The “Umbrella” hitmaker teamed her silver jersey with dark gray pants while she was on her way to a recording studio. She also wore a pair of stylish sunglasses as her accessory and pulled her hair into an up do, while carrying a silver bag.

Rihanna has been back at work after she was announced as the main headliner for Super Bowl LVII Halftime Show, which will take place on February 12, 2023. The 34-year-old surprised her fans in late September as she re-shared a post by Roc Nation that featured her hand holding an NFL ball with the caption which simply read, “Let’s GO.”

It was later reported that Rih has been mulling over a list of 50 possible guest artists to hit the stage with her during the coveted gig. According to TMZ, the “Only Girl (In the World)” singer is considering everyone she’s has collaborated with over the years to possibly appear with her. The long list reportedly includes the likes of Kanye West, Drake, Jay-Z, Paul McCartney, Calvin Harris as well as Pharrell Williams among other names.

There’s a chance that she may go solo without a guest, though it’s likely that she will have at least one guest artist to join her like other performances in the previous years. It’s currently unclear if the Grammy Award-winning artist has made a decision on the guest artist or not.