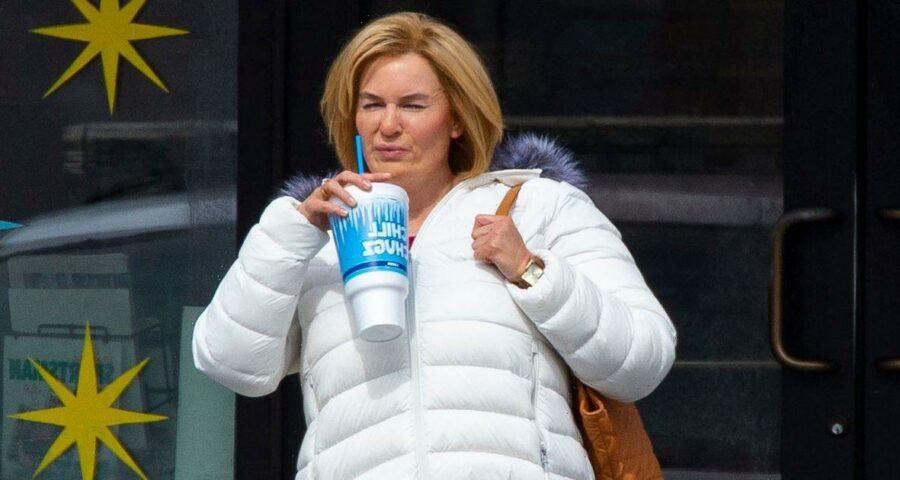 Renée Zellweger has transformed into the image of real-life convicted killer Pam Hupp for her new role as she looks barely recognisable while donning a controversial fat suit.

The Bridget Jones star is no stranger to changing her appearance for acting – having previously spoken about the anxiety she experienced doing yo-yo diets for the beloved screen character.

So this time, after bagging perhaps her most serious part yet for NBC's new crime show The Thing About Pam, Renée has instead opted to simply put on a costume instead.

The star, who has been known to put on 30lbs to play London-born Bridget in the past, has been spotted wearing her chunky outfit underneath a pair of baggy blue denim jeans and a white puffer jacket in between filming scenes for the new show.

In one snap, the Judy actress also held a large fizzy drink cup as she could be seen walking out of what appeared to be a cafe.

Wearing a red top underneath, the star strolled around the set where filming is taking place in New Orleans.

Renée, 52, also had a brown leather handbag on her shoulder, and matched her lilac fur hood with a pair of snow boots.

The star's hair has been chopped into a rounded bob to play Hupp, but she is still keeping her signature blonde shade.

The Oscar winner also appeared makeup-free for her new role as she squinted in the sunshine, and appeared to have a prosthetic nose moulded on top of her own in a bid to resemble Hupp.

Her bodysuit was also later pictured being carried by a wardrobe assistant, but the item of clothing has caused much criticism with Hollywood and campaigners claiming the use of one is fat-phobic and the film and TV industry should move on from using them.

The star's new six-episode series is being co-produced by her own production company Big Picture Co.

Hupp is currently serving a life sentence for shooting a disabled man dead.

In July, she plead not guilty to the murder of her friend Elizabeth 'Betsy' Faria, who was stabbed 55 times in 2011.

Prosecutors have alleged that Hupp killed her friend four days after persuading her to switch a $150,000 life insurance policy to her.

She was also accused of trying to frame Elizabeth's husband Russell.

Stay up to date with all the latest on Hollywood celebrities by signing up to OK!'s daily celebrity newsletter.