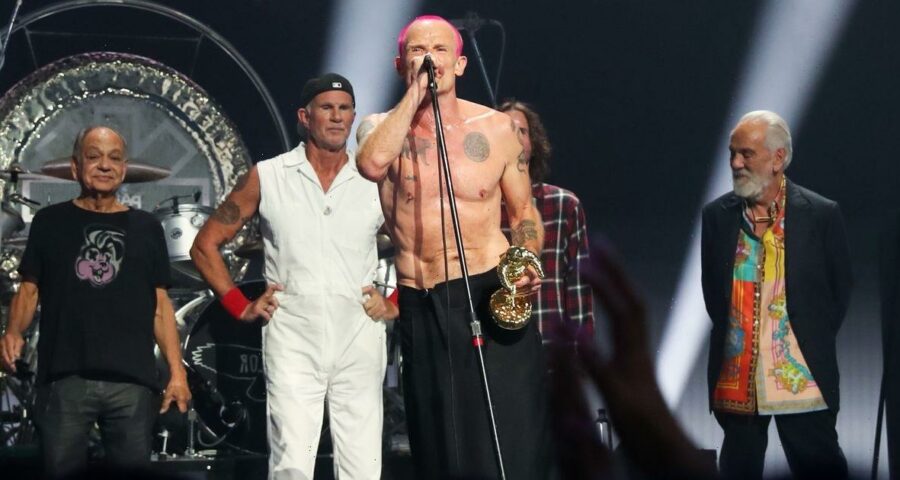 On collecting their award, bassist Flea took the opportunity to dedicate it to the late drummer of the Foo Fighters, Taylor Hawkins.

The 50 year old was tragically found dead in a hotel room in the north of Bogota, Colombia, where the band were set to play at a festival on Friday 25 March.

Appearing emotional, Flea, real name Michael Peter Balzary, told the audience: "There’s another musical legend and his name is Taylor Hawkins… I miss him every day. Fly on brother."

Frontman Anthony Kiedis then thanked "the sassy mistress known as MTV" and their fans for the award as well as his band mates for giving him "a purpose in life".

The Red Hot Chili Peppers were presented with their award by US comedy-stoner duo Cheech and Chong.

The comedians praised the "enduring mark on the world" the Los Angeles-based rockers had made as they introduced them to the stage.

The band gave an energetic performance medley of their songs, including hits such as Black Summer, from latest album Unlimited Love, and their 2003 single Can’t Stop.

Other notable speeches at the 2022 VMA Awards included Taylor Swift, who sent fans into a frenzy by announcing a brand new album, moments after scooping the evening’s top award.

The pop megastar took home several awards on the night, including the coveted best video and best longform video, for All Too Well (10 Minute Version) (Taylor’s Version).

Swift made her bombshell announcement in the final moments of the show.

Taking to the stage for the second time in the evening, the pop megastar said: "I’m so honoured to have been recognised alongside such amazing artists and directors.

"For the first time in VMA history, four of the directors in the video of the year category are women.

"You guys, I’m just so proud of what we made and with every second of this moment and we wouldn’t have been able to make this short film if it wasn’t for the fans.

"I wouldn’t be able to re record my albums if it wasn’t for you… you emboldened me to do that.

She continued: "Because you’ve been so generous I thought it might be a fun moment to tell you that my brand new album comes out on October 21."