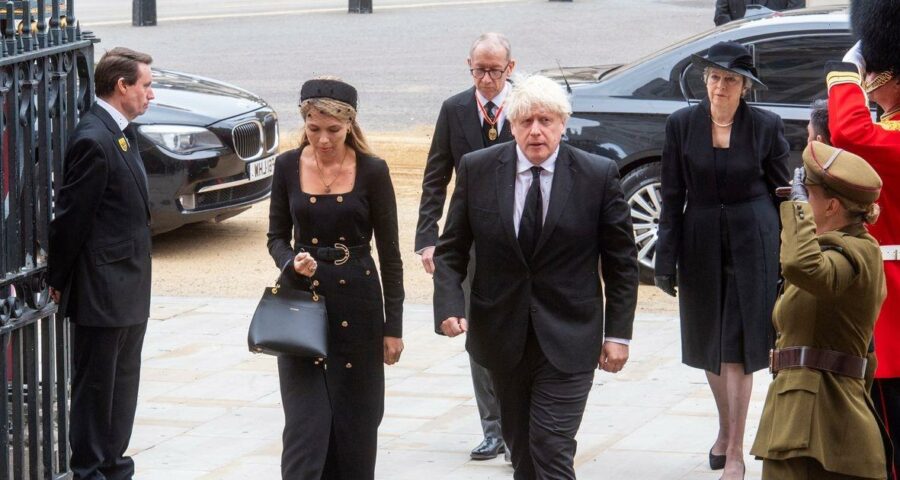 Each guest was dressed in black and many paid tribute to the late monarch with their outfit choices and jewellery selections.

Many of the female guests in attendance opted to wear black headwear, with some choosing hats while others opted for headbands.

Carrie Johnson, wife of former Prime Minister Boris Johnson, wore a veiled band rather than a hat, which she paired with a statement Karen Millen dress and a handbag from British designer Grace Han.

The 34 year old's tuxedo dress featured a low neck and gold details, and she completed her look with a gold necklace and earrings.

Showing her commitment to sustainable clothing, just as she did for her wedding, Carrie's £255 dress hired from rental agency My Wardrobe HQ.

Meanwhile, David Cameron's wife Samantha, 51, opted for a black silk dress from her own brand Cefinn, which retails for £390.

She wore her brunette locks tied back in a bun with a black veiled pillbox hat and statement earrings.

In contrast, current Prime Minister Liz Truss, 47, chose a much more understated outfit for the sombre occasion at Westminster, having opted not to wear a tailored coat or jacket.

Truss wore a £288 black dress from Reiss which featured a tie waist and cut out on the chest, along with a black fascinator.

Members of the Royal Family all chose elegant black outfits for Her Majesty's state funeral, with the Princess of Wales, 40, and Queen Consort Camilla, 74, both wearing black coat dresses.

Mum-of-three Kate opted for a tuxedo-style Alexander McQueen dress complete with a pleated skirt, and wore a statement pearl necklace that once belonged to the late monarch.

Princess Charlotte, seven, matched her mum in a similar style coat dress and wore a small horseshoe brooch as she paid tribute to her late great-grandmother.

Princess Eugenie, 32, and Princess Beatrice, 34, both chose black headwear for the funeral, and Eugenie sported a small black handbag by Gabriela Hearst.

Both princesses wore long black gloves to the service, as did Meghan, Duchess of Sussex, 41, whose dress featured dramatic cape sleeves. The mum-of-two accessorised with a pair of small pearl earrings and a large black hat.

Meghan arrived at Westminster alongside Sophie, Countess of Wessex, 57, who chose an elegant embroidered dress for the Queen's funeral.

She wore her blonde locks swept back into a low bun, as did many other guests, and sported a small black hat.