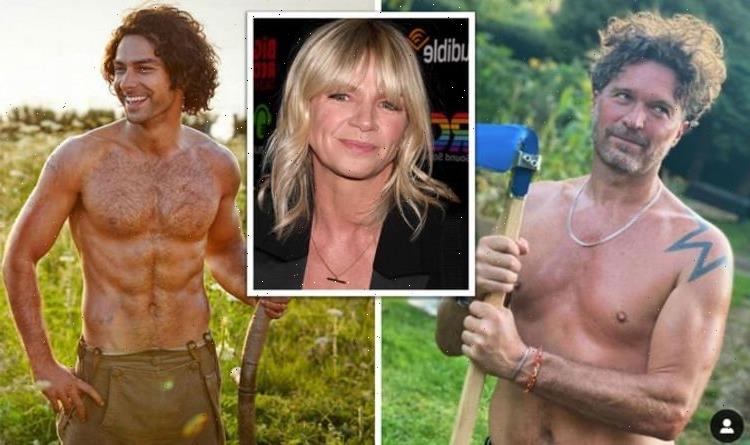 Zoe Ball took to social media this morning to share a picture of her topless boyfriend doing some work in the garden. The Radio 2 star thanked listeners for sharing their top tips after revealing that model Michael Reed had done some scything in the sunshine.

Michael, who she lovingly refers to as Curly Sue, had watched Matt Baker scything on Countryfile and so went out and bought the traditional tool.

He then used the implement to cut back the overgrown grass at home.

Zoe’s snap echoed a famous picture of Aidan Turner, in character as Ross Poldark in the popular BBC One period drama.

“Thanks listener & scything champion George for top tips this morning,” she added, in view of her 613,000 Instagram followers.

The 50-year-old radio and TV star was then inundated with replies.

“Is it me or is it hot today?” another added.

During her stint on the radio this morning, Zoe went into more details about her weekend.

“My fella watched one episode of Countryfile, saw Matt Baker doing a bit of scything and thought, ‘I fancy that’,” she explained.

“So he bought this old traditional scythe, put it together in front of my dad – my dad was like, ‘what is he doing?’ – and yesterday attempted to scythe the garden grass that we let grow long for the bees.

“[Michael] came in right at the end of the day, admittedly, he looked almost as good as Mr Poldark, he said to me, ‘Matt Baker made that look really easy’.”

The 43-year-old TV star was seen scything in an old episode of Countryfile which originally aired in 2016.

After learning the skill from an expert, he said: “I really enjoyed that, now one question: how does my scything compare to that Poldark bloke?”

Zoe is a keen gardener and caught the gardening bug during lockdown.

She regularly shares updates online to document her progress as she attempts to grow her own fruit and vegetables.

The mum-of-two has reportedly been dating Michael since December 2017.

She shares son Woody, 20, and daughter Nelly, 11, with ex-husband Norman Cook, who she separated from in 2016 after 18 years of marriage.