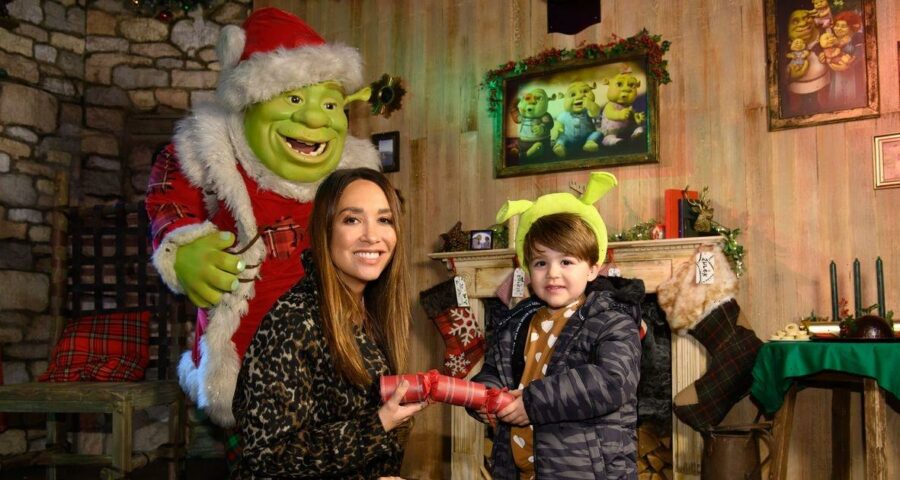 Myleene Klass posed with her rarely seen son Apollo as the pair got into the festive spirit at a Christmas event in London.

Myleene and her three year old son attended the Shrek’s Adventure! Christmas launch on the South Bank and posed in Shrek’s grotto, with the beloved character dressed up in a Father Christmas suit.

The mother and son were snapped pulling a cracker together, with Apollo looking cute in a pair of Shrek ears.

Myleene, 44, looked gorgeous in a leopard print coat, while Apollo wore a patterned coat and a brown tracksuit with white hearts on it for their day out.

Amy Childs, who is currently expecting twins, was also at the festive event with her daughter Polly, five.

The 32 year old recently revealed the genders of her unborn twins and announced that she and her partner Billy are expecting a baby boy and girl.

Myleene shares Apollo with her fiancé Simon Motson and she is also mum to daughters Ava, 15, and Hero, 11.

The former Hear’Say singer’s day out with her son comes after she revealed Simon had undergone a vasectomy following her four miscarriages.

Myleene shared the news with her followers as she uploaded a video of Simon exiting the doctors after the sterilising procedure on Instagram.

She wrote on her Instagram Stories: “If you’ve followed me for a while, you’ll know about my story to get my rainbow baby Apollo and the four heart-breaking miscarriages I suffered before I finally forgot to hold him in my arms.

“The amount of drugs, the toll took on my body, my head and my heart, the after effects, it’s a lot on the woman and men often admit to feeling helpless.

“Whilst childbirth is undeniably all on the woman, birth control should be on both parties. My doctor said my body needed a rest, so…”

She told her 414,000 followers that she wanted to post the video to highlight that having a vasectomy is “not emasculating”, but a respectful decision.

She captioned beside the clip: “My stories have blown up so putting this here for the menfolk to see that it’s empowering not emasculating to do this for your partner and we respect you all the more for it.

“The drugs I took to keep our son after losing four babies and the toll it took on my body followed by further birth control, it’s such a lot. It can’t all be on the woman.

Myleene continued: “Before he went in, I cried as it felt ‘final’ (it’s actually reversible) and then I felt admiration and like I’m in a real, grown up partnership. Love and respect him so much.

“Not all hero’s wear capes. Some wear a dressing and really tight pants for two days."