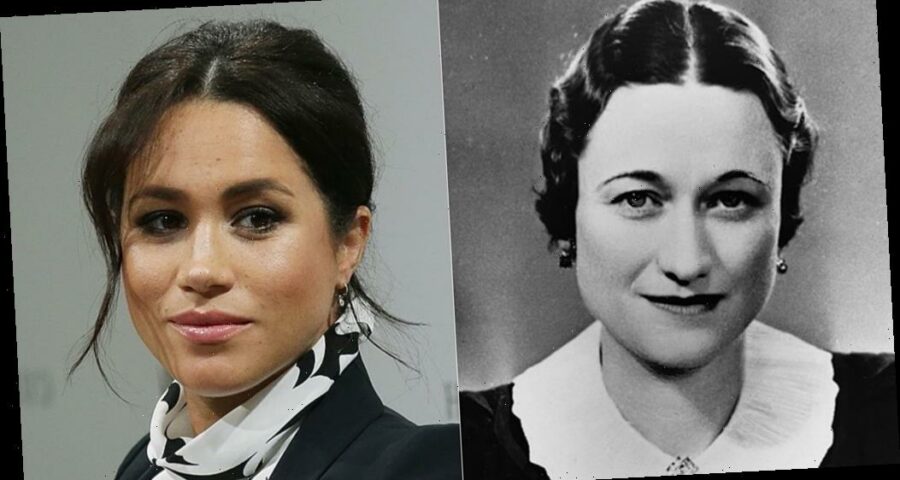 EXCLUSIVE: When Meghan Markle became engaged to Prince Harry, the former Hollywood actress was instantly compared to another American divorcee who married a British royal.

And while it’s easy to find similarities between the women, one royal author insisted they couldn’t be more different.

In 2019, Anna Pasternak released a book titled “The Real Wallis Simpson” about the Duchess of Windsor, who married Edward VIII in 1937. The former king famously abdicated the throne before quietly slipping out of England and marrying the socialite. George VI, Queen Elizabeth II’s father and Harry’s great-grandfather, took over the throne.

For her book, Pasternak tracked down Simpson’s last remaining circle of intimate friends who wanted to set the record straight about her controversial life. In 2020, The Gotham Group announced it will produce a film based on the publication, Deadline.com reported. 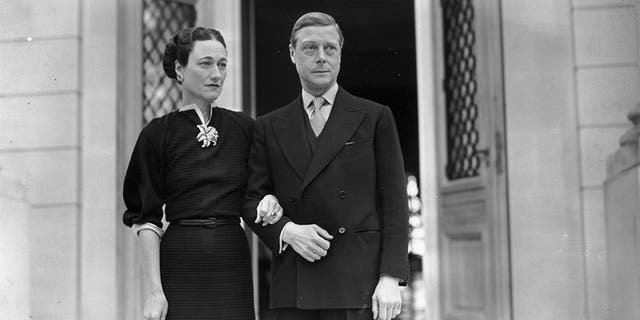 American socialite Wallis Simpson and British royal Edward VIII tied the knot in 1937. They remained together until his death in 1972 at age 77.
(Photo by Fox Photos/Getty Images)

The British writer told Fox News there are lessons that Markle, 39, can still learn from Simpson’s life. Simpson passed away in 1986 at age 89.

“The one thing that Wallis never did was that she never spoke out against the royal family and she had far more reason to than Meghan Markle,” Pasternak told Fox News. “In her interview with Oprah Winfrey, Meghan talked about how there were times where it was unsurvivable. Wallis Simpson once said, ‘Every morning my world goes to pieces on my breakfast tray,’ because after the abdication, she received hate mail and death threats. She became the most hated woman in the world.”

Pasternak pointed out that, unlike the former “Suits” star, Simpson was not welcomed by 1930s Britain when she embarked on a relationship with Edward. Deadline.com shared that the opposition against Simpson was so severe that Edward surrendered the throne so he could marry the woman he loved.

But Simpson never escaped the hatred she faced from the public. In the ‘30s, there were rumors that Simpson was a Nazi sympathizer, The New York Times reported. According to the outlet, Simpson insisted she never tried to influence Edward to regard Adolf Hitler and the Third Reich favorably. The outlet shared there was no reason for Simpson to do so because the royal “already regarded the Germans favorably.” 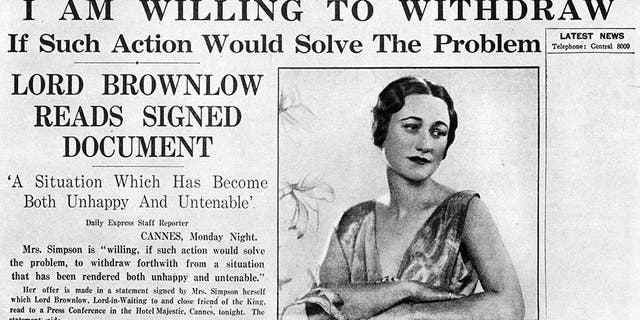 In 1940, Edward was given the governorship of the Bahamas, where he and Simpson stayed for five years, the outlet reported. Simpson kept busy working for the Red Cross and raised money for charities. In 1956, she released her memoirs titled “The Heart Has Its Reasons.”

“She absolutely knew that she could not change public opinion,” Pasternak explained. “So she sought to strengthen herself. She later said all that mattered was that she knew the truth of who she was.”

“Meghan is a smart, secured and emotionally savvy woman,” Pasternak continued. “Why is it so important to her to court public opinion? She could easily live out her fairy tale in California with her family. But speaking out only draws more public attention and criticism. I think the one thing she could learn from Wallis now is to never speak out against her in-laws.”

Pasternak shared that, unlike Markle, Simpson wasn’t welcomed by the royal family even after she married Edward. 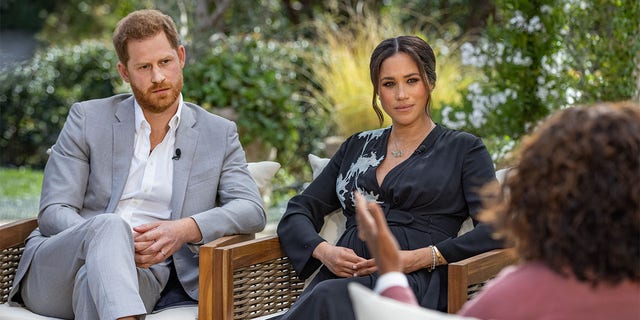 The Duke and Duchess of Sussex spoke out to Oprah Winfrey in a televised tell-all that aired on Sunday, March 7, 2021.
(Photo by Harpo Productions/Joe Pugliese via Getty Images)

“Meghan was absolutely welcomed into the fold,” she said. “She had this amazing wedding at Windsor Castle with all the royals present. Wallis would have killed for a tiny percentage of the effort that was made to welcome Meghan.”

Pasternak claimed Edward and his mother, Queen Mary, had a strained relationship after the abdication, which Simpson attempted to repair.

“Wallis tried desperately to create healing between Edward VIII and his mother Queen Mary,” Pasternak claimed. “She couldn’t bear it that he was estranged from his family. In fact, she wrote to her mother-in-law, who refused to ever accept her, and said, ‘It’s such a source of sadness to me if I’ve been the cause of separation between mother and son.’ So she always wanted healing within the family.”

It wouldn’t be until 1970 when the exiled duke and duchess gave a 50-minute interview to BBC journalist Kenneth Harris, The Telegraph reported. The outlet shared that on the night before the interview, Edward, then 75, got cold feet and attempted to back out. The outlet shared that the couple gave tactful responses, most likely because the royal family was also tuning in. 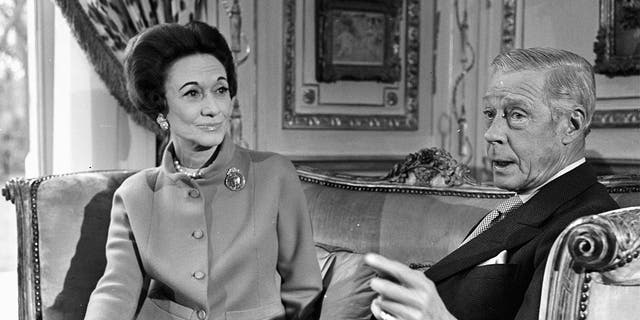 The Duchess and the Duke of Windsor being interviewed at the lounge of their Parisian residence.
(Photo by Robert Siegler / INA via Getty Images)

When asked if the couple had any regrets, Simpson said, “about certain things.”

“I wish it could have been different,” she said. “Naturally, we’ve had some hard times. Who hasn’t?”

Pasternak said the last remaining people who knew Simpson and Edward watched the Duke and Duchess of Sussex’s interview with Winfrey, 67, in March – and were surprised by what they saw.

“It does bring up an echo of the abdication,” said Pasternak. “But those who knew the duke and duchess are just so appalled by Meghan’s behavior. Because as I said, they feel that she had everything that Wallis didn’t. Everything from the HRH title to the royal wedding, Meghan received it. And Wallis received none of those things. So of course, they feel Wallis really did deserve them.” 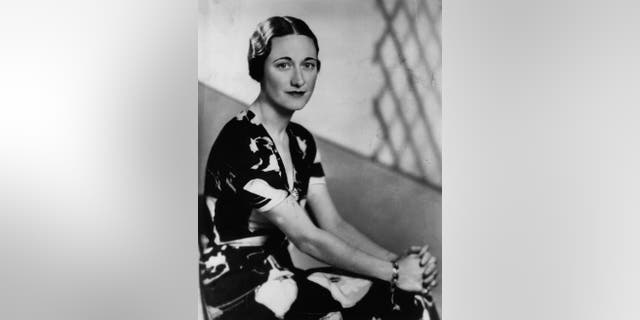 Pasternak also shared that on the night before Simpson married Edward, one of his aides warned her that she would never escape public scrutiny.

“One of his aides told her, ‘The people hate you very much, but if you make the duke happy, everyone will forgive you,’” she said. “And she made the duke happy for 36 years. She stood by this man and he adored her.”

Pasternak acknowledged that there are still misconceptions about Simpson that she hopes her book will clarify. But the one thing she hopes readers will learn is how different Simpson and Markle handled the backlash they’ve endured for marrying into the royal family.

“Wallis Simpson was seen as pushy and hard,” said Pasternak. “But the woman I encountered was terribly vulnerable. She had to develop this façade, which almost became like armor. Wallis accepted that she had become this hated figure. And the truth is, everybody in the world hated Wallis. But those who knew her behind closed doors loved her.” 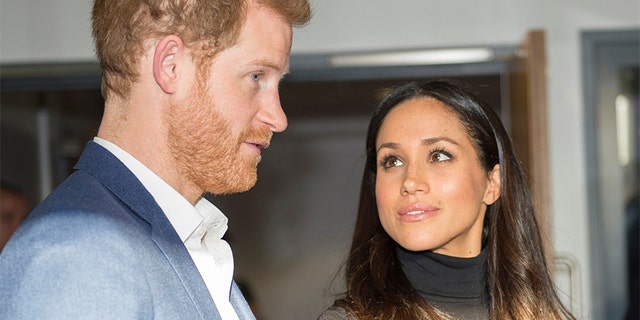 The Duke and Duchess of Sussex currently reside in California with their son Archie.
(Reuters)

“There are far more differences between Meghan and Wallis,” Pasternak added. “The circumstances are certainly similar and seem to be echoing, but the way they dealt with their situations are very, very different.”

After Harry, 36, and Markle married in May 2018 at Windsor Castle, the royal family seemed to welcome the Duchess of Sussex, a glamorous former TV star. The pair were seen as providing a fresh young face for the monarchy of an increasingly multicultural nation.

It didn’t take long for the fairy tale to unravel.

The couple stepped away from royal duties last year and eventually settled in California with their son, saying they wanted to escape racist coverage and unwanted intrusions on their privacy by the British media.

The duke and duchess are now expecting a baby girl due this summer.