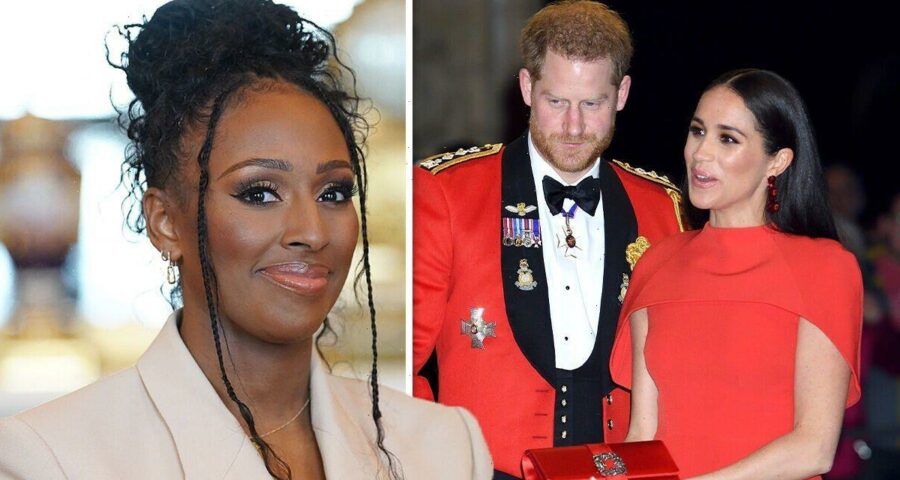 Harry and Meghan’s 2022 year in review

Meghan Markle, 41, and Prince Harry, 38, have made headlines since the release of their explosive Netflix docuseries, Harry and Meghan, earlier this month. The show has divided opinion across the world, but the Sussexes still have a supporter in X Factor winner Alexandra Burke, 34.

In an exclusive interview with Express.co.uk, Alexandra was asked for her thoughts on the doc.

She said: “I actually haven’t had a chance to watch it.

“I am looking forward to watching it because I absolutely love Meghan and Harry but I haven’t had the chance simply because of my workload, but I will watch it very soon.”

Alexandra’s inability to watch the series is understandable given that she is currently performing 12 shows a week in pantomime at the London Palladium, all while raising her five month baby.

The former Strictly Come Dancing star has taken on the role as the villain in this year’s production of Jack and the Beanstalk.

In her Palladium panto debut she is also acting alongside comedy greats Dawn French and Julian Clary.

On how it is going, Alexandra said: “Doing a show with the likes of Dawn French and Julian Clary is just amazing and I think for everyone, we have all been through a tough couple of years so to go into a theatre and laugh and smile is such a joyous moment that I think everyone needs.

“And [Dawn and Julian] are just wonderful. I don’t want to ruin it for anyone in case they have plans to come and see the show in the new year, but it is so funny! The whole cast is just incredible but Julian and Dawn are just, you know, they do what they do and it’s amazing.”

Alexandra is also wearing an “iconic” costume designed by Hugh Durrant, who is also famed for his work on Cher’s 2003 Farewell Tour.

However, things get tricky when she needs to get out of the ensemble in order to feed her baby.

She continued: “It is quite intense and I am breastfeeding so the baby is with me 24/7. And, let me tell you, that costume is not easy to get out of! I can tell you that for free!”

It comes as Alexandra partnered with Save The Children to front their Christmas jumper campaign which encourages people to upcycle their existing knitwear rather than purchasing a new one every year.

She launched a “Jazz Your Jumper” pop-up store earlier this month and decorated her “Elf in the Room” jumper as a nod to her famous “elephant in the room” meme.

The store is now closed but you can still donate here. All donations given between now and March will be doubled by the UK Government up to the amount of £2million to help mothers and babies thrive in some of the most rural communities in Kenya.

All other funds raised will help some of the most disadvantaged children in East Africa, across the world, and in the UK, get access to food, healthcare and education.

On taking part in the campaign, Alexandra said: “It was just great to raise awareness about sustainability and being kinder to our environment by reusing what we already have.

“It was a brilliant day and they have already raised £1million as well which is fantastic. It was so lovely to be there and to be able to raise awareness about what they are doing.”

As well as jazzing up a Christmas jumper for herself, she also made one for her baby.

Talking about her plans for Christmas day, the singer-turned-actress explained: “Christmas day is actually my only day off so the jumper that we made for the baby, the baby will be wearing it which will be lovely.

“But the plan really is to relax as much as possible because of my work schedule, I can’t believe that is the only day off I have!”