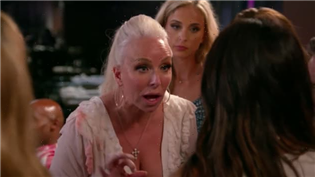 That conflict is far from over, but there’s much more to come.

Bravo just dropped the Season 12 midseason trailer and it is filled with happy times, sad moments, and absolute fury.

Teresa doesn’t want anyone talking about her man … even if they’re only repeating what everyone is saying.

Like almost all trailers for this franchise — or any other reality series — things don’t start off on a sour note.

Instead, we get to see the Housewives and their husbands laughing and joking around together.

From trying extra spicy food (with kisses) to sharing laughs, even the most dramatic cast members are having fun.

On a less cheerful note, Teresa’s daughters have to cope with leaving their childhood home.

They have a lot of memories in that place, and have to pack things up and move.

“Moving is going to be very sad,” Gia admits.

Though she is 21, she still has a lot of connections to that house.

18-year-old Gabriella is more direct, admitting: “I don’t want to leave this house.”

“The only memories that we’re going to have was here with dad,” Gabriella adds.

It is not as if they can make new ones in the United States, after all.

After hearing this, we see Teresa herself burst into tears over the emotional weight of this change.

The meat of the midseason trailer also relates to Teresa, but it is not about her children.

We see Joe Gorga, Teresa’s brother, questioning Luis about his past.

A lot has been said … and Luis seems on the fence about defending his poor reputation.

“I’m not going to sit here and say that I was this crown of a man,” Luis admits.

This being a trailer, we do not get to see the full context of that.

But things don’t get explosive until the titular Housewives dig into the topic.

Teresa is feeling downright hostile, accusing Margaret of “dragging” Luis’ name “through the mud,” as if she weren’t just repeating what’s been widely reported.

“Like this one, he’s abusive,” we hear in the trailer at one point.

We later see Margaret angrily declare: “I’ll tell you where she belongs: a zoo.”

Margaret is heard warning: “She f–ked with the wrong girl.” Presumably, she is referring to Tre.

Of course, it’s not all about Tre and Margaret butting heads, either.

Things have gotten difficult between Jennifer Aydin and her husband, Bill, this season.

“You were doing your thing without any consideration of me,” she says, confronting him.

Jennifer speaks to Margaret about these difficulties and Bill’s perceived lack of interest in putting in the work.

“It’s always me trying for him,” she characterizes the dynamic of their marriage.

Jennifer then tearfully admits: “I don’t know if I can work through it.”