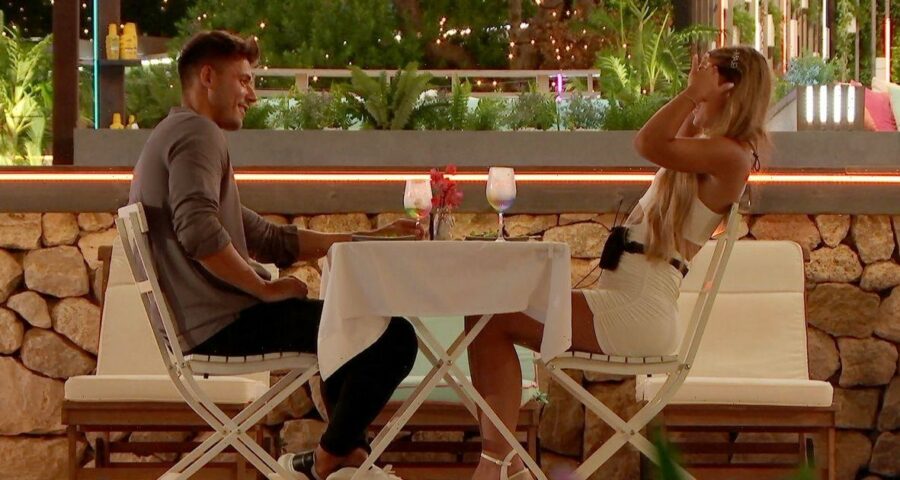 Love Island fans have called out Brad McClelland on using the same chat up line for three different girls in the villa in a brazen attempt to stay on the show.

The 26-year-old labourer from Northumberland annoyed viewers by trotting out the same line for a third time with bombshell Lucinda Strafford, having already said something strikingly similar to Faye Winter and Rachel Finni before her.

Brad snapped up his chance to go on a date with new Islander Lucinda and it wasn't long before he wheeled out his favourite phrases to keep her interested.

He said: "For the first time, I've literally been like: 'Jesus Christ, I'd be buzzing to get into bed with her.'"

But outraged viewers knew they'd heard that line somewhere before as Brad hasn't even been in the show for two full weeks yet and has already used it on both Faye and Rachel.

Former winner Amber Rose Gill picked him up on his fickle behaviour, tweeting: "Na Brad just lied?????? You said Rachel was your type????"

One person tweeted: "‘for the first time’ brad you’ve said that about like 5 girls so far"

Another fan wrote: "Brad using the same lines on Lucinda that he used on Rachel… I need him out of this villa IMMEDIATELY"

Someone else commented: "Brad keeps repeating this when I first saw you line to every new single girl that comes in the villa"

Another fan agreed: "brad’s really reusing them same six lines every time a new girl walks through the door."

Someone else tweeted: "Brad dropping that same 'first time' line with every girl no variety to his game"

Brad had already shocked Love Island fans by dropping Rachel who had chosen him over Chuggs Wallis when she entered the villa as a bombshell as soon as Lucinda arrived.

As she asked which of the boys was not settled with their partner, Brad shouted out: "I'm not!"

He later told Lucinda when talking about Rachel: "I've only known the lass for two days, you're more my type."

Rachel has been teary since choosing to dump Chuggs in favour of Brad just days ago, wondering if she chose the wrong boy.

Brad started out in the villa coupling up with Faye on the first day, but soon cast her aside for bombshell Chloe Burrows – who later dumped him in favour of a friendship couple with Hugo Hammond, leaving Brad desperate to couple up with Rachel to stay on the show.