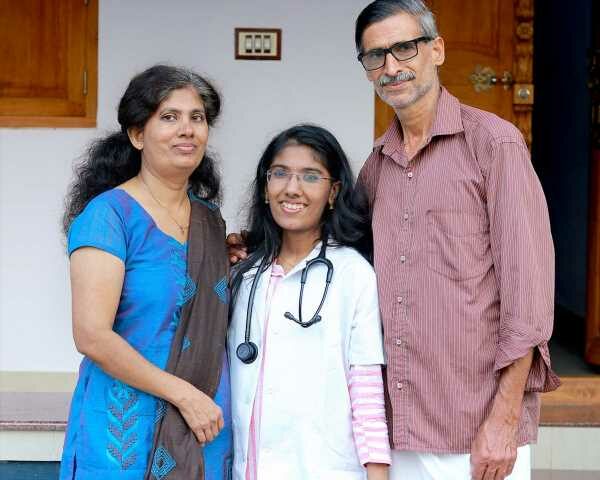 ‘My father is a postman. My mother is a homemaker. No one in my family had studied medicine.’
‘I wanted to be the first doctor in my family so I could listen to people like me and help them feel better about themselves,’ says Archana Vijayan, an MBBS student with a disability, who was initially denied admission into medical school, even after passing the NEET twice.

Why do we visit a doctor?

To find the root cause of a health problem and get expert advice?

But have there been instances when you were sick and realised a few minutes of interaction with a certain doctor made you feel better, even before you popped a pill?

According to MBBS student Archana Vijayan, love and empathy are powerful drugs that heal a lot of illnesses — both mental and physical.

Archana was barely two when she was diagnosed with spinal muscular atrophy, a genetic disorder that affects the central nervous system, causing problems with mobility and delayed motor skills.

When her parents consulted a doctor, they truly believed that Archana’s condition could be overcome through physiotherapy.

“My milestones were slow and delayed. I was five when I started walking. I could barely walk a few steps on my own without support. None of us, including the doctor who was treating me, realised the severity of my condition at the time. I was dependent only on physiotherapy. Today, I see there are so many more possibilities in terms of treatment. Maybe I wasn’t aware or our family didn’t have the resources.” Archana, now 23, tells Rediff.com‘s Divya Nair, while remembering her childhood.

“When the rest of the children were busy playing outdoors and at playgrounds, I spent a large part of my childhood years visiting hospitals and around doctors. Unfortunately, all the doctors I spoke to would discuss my medical condition at length with me or my parents. But no one really bothered to ask me how I felt or what I was going through,” she recalls.

“It was more about anatomy, and less about the person, the human being I was. I don’t know how many people would agree, but there have been so many instances where I’ve felt that the healthcare industry sometimes lacks a bit of empathy,” she adds.

“While it’s true that doctors in our country are really very busy and some of them are overworked and stressed, over the years, while I spent time waiting to be attended to at hospitals, I realised that the approach of treating patients needs to change. That’s how I found my purpose to life,” says Archana, who is pursuing her fourth year of medicine at the Government Medical College in Kottayam, Kerala.

Archana was well aware that becoming a doctor wouldn’t be an easy dream to chase as a differently-abled person. It didn’t seem impossible either. “My father is a postman. My mother is a homemaker. No one in my family had studied medicine. I wanted to be the first doctor in my family so I could talk to and listen to people like me and help them feel better about themselves,” she underlines.

Although Archana missed kindergarten, her father Vijayan, who worked as a postman in Palakkad, ensured that his daughter had the best education he could afford.

“I enrolled directly in Class 1. Achan (father) would drop me to school on his two-wheeler on his way to work and pick me up in the evening,” says Archana who studied in the Malayalam medium at the Aided Senior Basic School, Manjaloor, Palakkad, till Class 7.

“Accessing toilets was a challenge, but I always took help of a chechi(aunty) at school,” she says, while explaining that her classmates and teachers always took care of her basic needs.

Class 8 onwards, Archana had to shift to the Government Higher Secondary School Thenkurissi in Palakkad. “The school had regular Indian toilets but it wasn’t disabled friendly. Knowing that I could not access them, the school authorities arranged a Western toilet for me and even put me in the same classroom for Classes 8, 9 and 10 so I didn’t have to walk much.”

These little provisions ensured that Archana could focus on her studies and helped her secure an A plus in Class 10.

Post Class 10, Archana’s woes got worse. “I was not allowed to take science because I was disabled,” says Archana, recalling the first time she was discriminated against because of her disability. “I was good at studies. I’ve always wanted to be a doctor and I was willing to work hard for it.”

Archana was adamant and with the support of her parents, she sought admission at the Government Higher Secondary School in Koduvayur, Palakkad. “In Classes 11 and 12, the laboratories were on different floors and there was no elevator. So my friends would lift me up the stairs.”

In order to support her, Archana’s previous school authorities even gifted her a wheelchair so she could be more independent at college.

“I didn’t use a wheelchair till college. After Class 10, my school arranged for one,” she says while talking about the challenges several disabled students face in India. “Not having access to elevators and wheelchair-friendly ramps were some of the reasons they told me to drop science.”

Her perseverance to follow her heart paid off. Even after switching from Malayalam to the English medium, Archana did brilliantly and scored 98 per cent in her Class 12 board exam.

Until 2016, the Medical Council of India allowed only candidates with below 70 per cent disability of the lower limbs to study medicine.

A landmark judgement passed in December 2016 (external link) the benchmark disability as prescribed under the provisions of the Right of Persons with Disabilities Act, 2016 was increased from 7 to 21 which included blindness, low-vision, hearing impairment, locomotor disability, dwarfism, intellectual disability, multiple sclerosis and muscular dystrophy.

While the judgment was meant to provide equal opportunities for the disabled, Archana realised that reality was a lot different.

“Since I was disabled, I was asked to submit a medical fitness certificate in order to qualify admission. The Kerala medical board at Trivandrum Medical College, Thiruvananthapuram, said I was not eligible because I didn’t meet the medical fitness parameters. In fact, they were extremely harsh when they asked me to reconsider my choice to pursue an MBBS.”

Archana was asked to consider an Ayurveda course. But the youngster was confident she deserved to pursue only a medical degree. She reappeared for the NEET in 2017, only to be rejected by the panel for the same reasons.

Those two years — 2016 to 2018 — when she took a break to prepare and reappear for the NEET also taught her some important life lessons. “Initially, everyone asked me ‘What are your plans? What are you going to do now?’ That was out of concern. But when I was rejected twice, even my parents became a little critical of my plans for the future,” she says.

“I was depressed and had no one to console me. Frankly, it was a huge moment of realisation that I wasn’t prepared for. At the same time, I realised that if I gave into depression and settled for anything less, it would be entirely my loss. I didn’t want to think of alternatives. And to make that happen, I’d have to study harder and prove that I was capable.”

In 2018, Archana travelled to Chennai and convinced the medical board there that she was capable and willing to work hard if she was presented the right opportunity. That year, she cracked the NEET and secured admission at the Kottayam Medical College where she is currently pursuing the fourth year of her dream course — an MBBS. 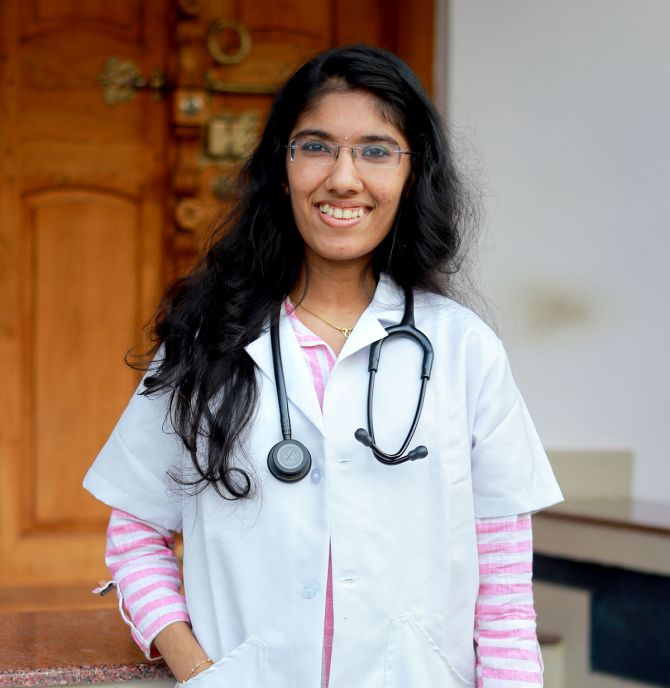 After losing two years in a battle to prove her merit, Archana has no time to rest or celebrate her milestone.

Her mother Devi moved with her from Palakkad to Kottayam, where she currently lives and studies, while her father lives in Palakkad with her brother Vishnu. But navigating each day continues to be a challenge.

“I cannot sit for long hours at a stretch. Even though KMC is a medical college, there are no ramps or lifts for disabled students,” says Archana while explaining how small changes can make schools, hospitals and public places accessible to all.

“Ramps and elevators are a must at schools, colleges, hospitals, railway stations, airports. Not only for disabled students like me, but it’s useful for senior citizens, for accident cases, people with poor mobility. KMC is a huge campus and in the first two years, most of our theory takes place in classrooms. I also have to attend seminars, and lecture halls. These places are not easily accessible for the disabled,” she says.

“In the absence of ramps and elevators, I have to navigate staircases or seek help from someone, due to which I am not able to reach the classroom on time. I have raised this issue several times to the authorities. I have no shame in bringing important issues to light. I am not someone who gives up very easily. But when your repeated pleas are not cared for, sometimes you do feel a lack of self-respect.”

Apart from coping with inadequate resources, Archana echoes the sentiments of thousands of overworked medical aspirants in India when she says, “We are working 14 to 16 hours a day. There is hardly any time to rest. By the time we get to our hostels and homes, we have no energy to study.”

After facing so much discrimination and rejection, one might think Archana would be apathetic to society. But she is quite the opposite. Despite her daily struggles, Archana believes in looking at the brighter side of things and setting an inspiring example for others to lead and follow.

One of the people who inspires her is Dr Sindhu RS, who overcame polio to become a gastroenterologist at Government MCH in Kottayam.

“Until a few years ago, the college I studied in wasn’t disabled-friendly. But now I am told it has introduced ramps for wheelchair access and some of the laboratories have been shifted to the ground floor. So I am happy I have at least made some difference. I also understand that these things take time and one has to be patient,” says Archana.

“Besides, I’ve always had the support of my family, friends, peers and teachers to guide me. So I am fortunate in many ways.” Archana, who sings and has performed at various venues in Kerala, including the State Youth Festival, believes that listening is the first step to healing any disease.

“Love is a powerful, life-saving drug,” she insists.

“The reason why so many young people are depressed in our country is because they have no one they can talk to or open their hearts to. You have to understand that everyone you meet may not be looking for advice, sympathy or a solution. Most of us just want someone to listen to what we have to say without any fear of judgement,” she says.

“I do the same. I listen to the patients, what they have to say. I spend time with them as much as I can. I feel that sitting next to someone and letting them talk about their problems, and having someone to love and take care of them heals 90 per cent of the problem. The rest can be cured with medicines.”

“There is a mental image of the doctor I want to be in real life. It’s like I want to meet the expectations of patients like me who are looking for a good listener. Someone who can treat patients with love and empathy.”