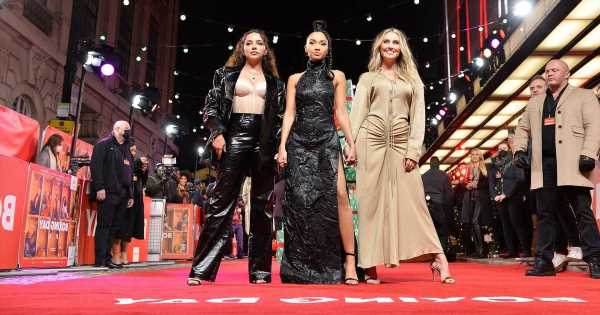 Little Mix stars Jade Thirlwall, Perrie Edwards and Leigh-Anne Pinnock have sent their fans wild after sharing a snap from a Christmas catch up.

Posing for the photo the trio wrapped their arms round one another. Leigh-Anne, 31, sported a brown turtleneck jumper, while Perrie, 29, opted for a green overcoat. Jade, also 29, donned a cropped white jumper as she flashed her side tattoo.

The popular girl band went on hiatus earlier this year, but have remained close.

Sharing the reunion snap to the band's Instagram page they wrote: "Reunited for a Christmas catch up and it feels so good."

Fans were quick to share their excitement in the post's comment section, with one writing: "A Christmas wish come true" while a second added: "My heart just made a happy jump."

While others said trio had "saved Christmas" with their reunion, and the official Instagram commented: "Coming to save the holidays with this reunion."

Some fans asked: "so when’s the album dropping?" while another joked: "gotta post the 2 'cancelled hiatus' posts to fit the grid huns xx"

The band, who was created on X Factor over ten years ago, announced in December 2021 that they were taking a break to work on solo projects but insisted that the band was not splitting up.

An official statement was provided by the trio alongside a montage of clips posted on Instagram of them together, explaining their decision to their fans.

“We wanted to let you all know that after the Confetti tour in April/May next year we are going to be taking a break from Little Mix,” it read.

It’s been 10 amazing years, a wonderful non-stop adventure, and we feel the time is right to take a break so we can recharge and work on some other projects.

“We can’t thank you enough for your love and never-ending support since the beginning. We love you all SO much.

“We are not splitting up – Little Mix are here to stay. We have plans for more music, tours and performances in the future. We’ve made so many incredible memories with you all, and we can’t wait to make so many more.

“We’re sisters and we’ll always have each other and you, the fans, in our lives. Little Mix is forever. See you on tour! Jade, Leigh-Anne and Perrie x”.

The break from the band came a year after former member Jesy Nelson announced she was leaving the group.