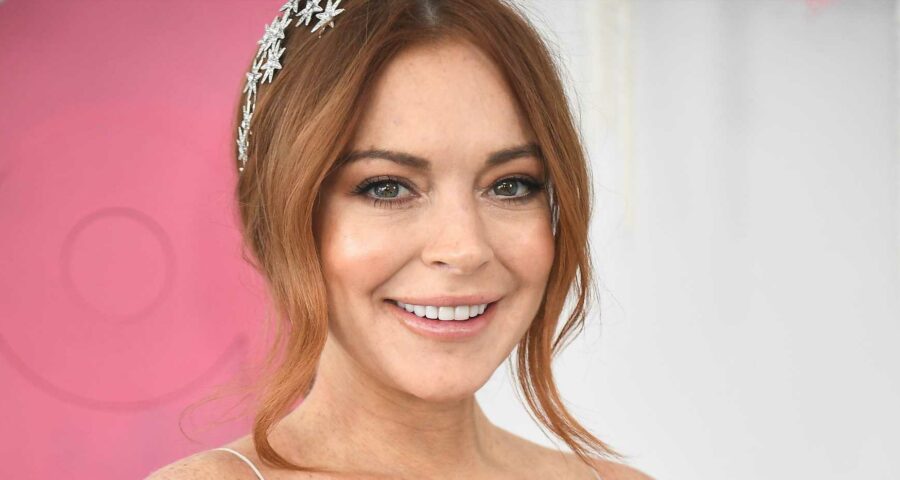 Living Legend and Person Who Taught Us How to Throw a Party in Mykonos Lindsay Lohan has been working in Hollywood since she was a literal kid. So yes, she’s rich. But much like the plot of I Know Who Killed Me, Lindsay’s net worth has endured tons of ups and downs. TL;DR: She’s still very wealthy. But while she’s been legit RICH in the past, her current reported net worth is less than half of what it was back in ye olden days.

However! Things are looking up for the actor’s net worth in 2022 thanks to Netflix, NFTs, and nostalgia—and the fact that she married a super-wealthy financier this past summer prob helps. And just what is Bader Shammas’s net worth, you ask? Various sites estimate his net worth stands somewhere between $4 million and $100 million, so…basically we have no clue. But what we *can* tell you is all the deets surrounding LiLo’s, so let’s jump right in. And while we’re at it, let’s take a sec to admire how truly stun she looks on our latest “Work” issue cover:

According to Celebrity Net Worth, Lindsay’s super-high-per-movie salary netted her about $28 million back when she was one of the most in-demand actors in Hollywood. And honestly, even before going fully A-list, LiLo was taking home a ton of money per movie—Freaky Friday earned her $550,000, while Confessions of a Teenage Drama Queen and Mean Girls earned her $1 million each.

Sadly, this was also around the time Lindsay went through some personal troubles, as tabloids were giving her the super-negative “party girl” treatment, and her per-movie salary was getting smaller and smaller. By the time 2012 rolled around, Lindsay earned just $300,000 for Liz & Dick, and even less (just over $6K) for 2013’s The Canyons.

Lindsay has dealt with a number of legal and personal issues over the years (which can be a financial strain as well as an emotional one), and the high salary she made at the beginning of her career had to sustain a pretty expensive lifestyle. Back in 2013, Celebrity Net Worth reported that among Lindsay’s more !!! expenses were an $8,000-a-month mansion, a $40,000 tanning salon bill, and a $144,000 storage locker. On top of all that, she also had an alleged $46,000 tab at Chateau Marmont, which, honestly, sure! It was THE spot, after all ¯\_(ツ)_/¯.

By 2012, Lindsay owed a reported $233,000 in back taxes, and the IRS even ended up seizing control of her accounts. The good news? She earned $2 million to film her Oprah docuseries Lindsay in 2013, which def had to have helped!

Lindsay Lohan’s Current Net Worth Is Over $1 Million

Specifically, $1.5 million, according to Celebrity Net Worth. Which, to be clear, is a huge amount of money! And despite some past projects not working out all that well (like her ill-fated MTV reality show, Lindsay Lohan’s Beach Club), Lindsay’s “beach house” in Greece is still going strong:

Plus, Lindsay could see even more money from the rise of NFTs. As she told Forbes in March 2021, “The process of receiving royalties for your work is not the most seamless and there are multiple parties involved and many moving parts. With tokenization, the process is transferred onto the blockchain in such a way that every time the art, music, movie, etc. is used or shared, the artist would automatically receive royalties. I think it’s a great way to bridge the gap between the consumer and artist.”

But like the entrepreneur she is, Lindsay isn’t just banking on passive income, obvi. Lately, the celeb has been keeping busy (and making coin) with her podcast and filming schedule. In October 2021, she inked a deal with Studio71 for her first podcast, The Lohdown with Lindsay Lohan, and in March 2022, she announced a new two-picture deal with Netflix. Oh, and on top of all that, she’s starring in a Netflix holiday rom-com, Falling for Christmas, which premieres on November 10! All the deets on that project right this way:

Lindsay also recently teamed up with Allbirds to star in a campaign for its newest running shoe, the Tree Flyer, *and* Planet Fitness for a truly iconic Super Bowl commercial, so it’s def only a matter of time before she’s back in the endorsements game, too. Make that $$, Lindsay!!

Very much here for Lindsay’s revival and can’t wait to watch her net worth THRIVE.