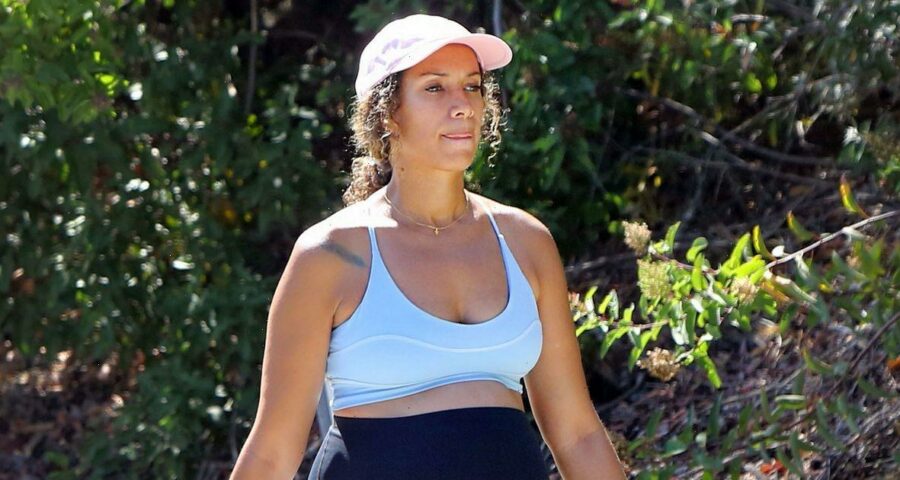 Pregnant Leona Lewis was spotted out on a summer’s hike in Los Angeles on Wednesday afternoon.

The 37 year old pregnant star was accompanied by her husband Dennis Jauch as the pair worked up a sweat walking around the Hollywood Hills area together.

Leona was dressed in head-to-toe exercise gear as she sported a light blue sports bra and a pair of high-waisted black leggings, which she wore over her blossoming bump, and had a blue shirt wrapped around her waist.

The Bleeding Love singer had her brown curls tied back in a ponytail and accessorised her hiking outfit with a bright orange cap and a pair of grey and pink Nike trainers with a chunky sole.

Leona hasn’t got much longer to wait before her baby comes and appeared to be making sure she got all the exercise in she could ahead of welcoming her first child.

The X Factor star announced that she and husband Dennis were expecting back in March as she revealed to fans that their baby would be arriving in the summer.

Leona shared recently on Instagram that her pregnancy had got the best of her appetite as she posted a photo of her tucking into a tasty dish in a car, unable to wait to get home to eat.

In a snap posted before that, the expectant star looked radiant as she cradled her baby bump whilst stood by a pool wearing an off-the-shoulder light green floral maxi dress.

The star had her hair styled in a flattering updo and sported a pearl headband as she held onto a matching pearl bag in the ethereal shot.

The star’s summer hike this week comes after she celebrated her second baby shower in LA recently.

Leona posted a stunning photo of herself at the occasion as she wore another floral print maxi dress, this time in the colour pink, which had a cut-out in the middle revealing her baby bump and she rocked long braids with her vibrant look.

The singer praised her friends for organising the shower as she described the event as “magical” in her caption.

Leona wrote: “Feeling all the love at my baby sprinkle. Love my friends and fam so much, feeling very supported and uplifted at the final stage of pregnancy. @thepicnic.collective thank you for this magical set up.”