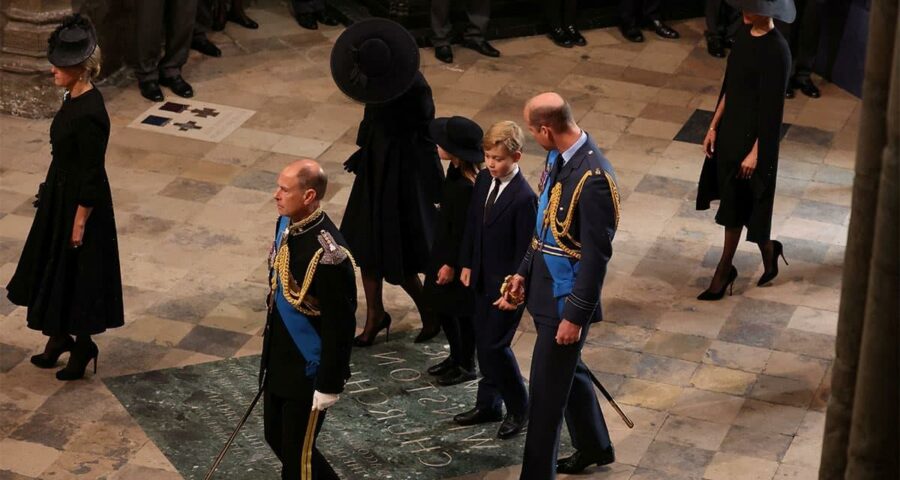 There was a last minute change to the Queen‘s funeral procession involving Prince George and Princess Charlotte.

All eyes were on the royal family unit as they gave the Queen a special send-off.

It had been planned for the royal children to walk behind their parents in the procession, however there was a change last minute.

Given their young ages, Prince George and Princess Charlotte were given the extra support and comfort from their parents.

They put on a brave face at the procession, walking between the Prince and Princess of Wales.

Ahead of the ceremony, grieving Princess Kate and her daughter shared a heartwarming moment.

The Princess of Wales was seen comforting Princess Charlotte and she gave her a tender touch on her shoulder in a show of support before they walked the procession together.

There were 2,000 people in attendance at the Queen’s state funeral with the royal family reuniting in grief to celebrate Her Majesty’s remarkable life.

Queen Elizabeth II died aged 96, surrounded by the love of her family, at her summer residence Balmoral in Scotland.

There has been an outpouring of love for the Queen with world leaders, European royals and celebrities reacting to the news of her passing.

REVEALED: Why Prince Louis will not attend the Queen’s funeral

In recent weeks, the Princess of Wales told mourners outside Windsor Castle about the moment her son Louis consoled her over the Queen’s death.

“Louis said at least Grannie is with great grandpa now,” Kate was overheard saying, according to one onlooker outside Windsor Castle.