Kourtney Kardashian is not too thrilled right now for more than one reason!

As we previously reported, the newlyweds finally spoke out about the Blink-192 drummer’s hospitalization with a “severe life threatening” case of pancreatitis. As Travis explained on social media, he had gone for a routine endoscopy on Monday and was “feeling great” at the time. However, he started to develop “excruciating pain” after dinner that night and has “been hospitalized ever since.”

The artist shared that he had “a very small polyp” in a “sensitive area” that needed to be removed during the endoscopy, and it unfortunately “damaged a critical pancreatic drainage tube.” That is what led to the bout of pancreatitis. Fortunately, it sounds like he is doing much better as he stated on Instagram Stories:

“I am so very very grateful that with intensive treatment, I am currently much better.”

Meanwhile, Kourtney expressed on IG how “grateful to God for healing my husband, for all of your prayers for him and for us, for the overwhelming outpouring of love and support.” She added:

“I am so touched and appreciative. I am so so thankful to our specialists, doctors and nurses at Cedars Sinai for taking such wonderful care of my husband and me during the stay.”

But hours after opening up about the health scare, the Keeping Up With the Kardashians alum had a direct and angry message for some folks: the paparazzi. In case you didn’t know, TMZ first reported on Thursday that Kourt was seen running errands in Encino a day before and rocking the musician’s DTA Records merchandise during his hospitalization. However, it turned out this wasn’t true! The Poosh founder actually never left Travis’ side in the hospital. TMZ later updated the report, explaining:

“The photo agency which licensed the photos of Kourtney, represented they were taken Wednesday in Encino. We’ve spoken to sources close to Kourtney who tell us the photos are actually from several weeks ago, and she has not left the hospital since Travis was admitted.”

Well, Kourtney (understandably) was not too happy with the mishap! She took to Insta Stories on Saturday to slam the insensitive paps for selling old pics of her and trying to pass them off as current in order to spin a particular story during this difficult time for the couple. The momma wrote:

“And to the paparazzi who sold pictures of me ‘out and about’ while my husband was in the hospital fighting for his life…these were photos actually taken weeks ago, (I can’t even remember the last time I wore that sweatsuit in the photos)…I didn’t forget about you. A new level of low, monetizing off of our nightmare. Really savagely uncool when I actually didn’t leave his side…shame on you.”

Damn! You can ch-ch-check out the call out (below): 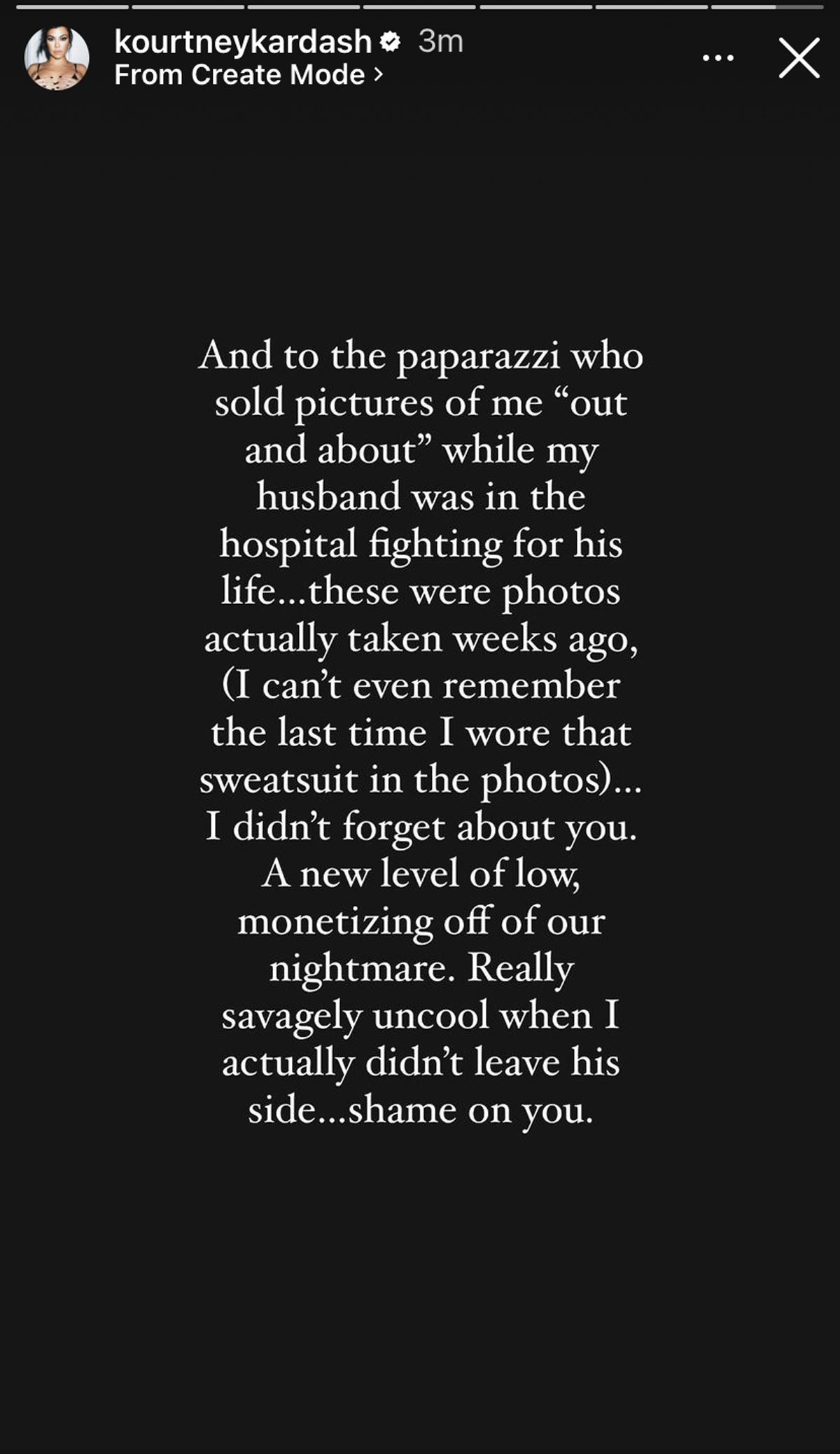 Terrible that Kourt and Travis had to go through this on top of an already stressful and frightening situation. We are sending so much love to them while he recovers.