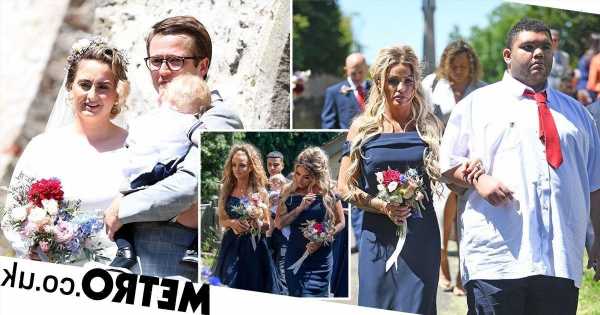 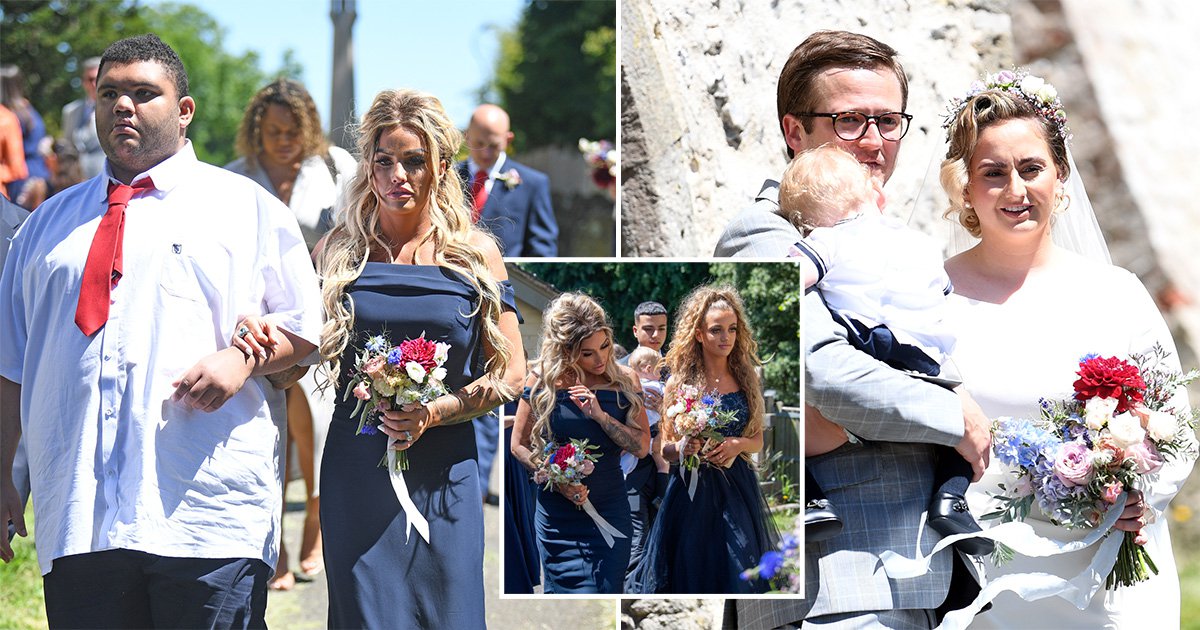 Katie Price was flanked by her children as celebrations got into full swing at her sister Sophie’s wedding in west Sussex on Wednesday.

The My Crazy Life star served as a bridesmaid alongside daughters Princess, 14, and Bunny, seven, as Sophie tied the knot with partner Harry Brooks this week.

She was also accompanied by sons Harvey, 20, Junior, 17, and Jett, eight, who looked dapper in suits.

It would be easy to not recognise Katie’s eldest daughter Princess, who she shares with ex-husband Peter Andre, as the teen looked older than her years in her stunning blue bridesmaids dress featuring a tulle skirt, and teamed with big curly hair, heavy make-up and a pair of heels.

Katie, 44, looked sophisticated in a blue off-the-shoulder dress and her blonde hair styled in loose curls.

The former glamour model was escorted into the church by Harvey, who looked suitably smart in a white shirt and red tie, and cheerfully waved at onlookers before heading inside. At one point, Harvey showed his sweet nature as he gave bride Sophie a helping hand as she walked away from the church in her wedding gown, which featured a train and flowing veil.

After the ceremony, Katie managed to gather her children for a family photo, while newlyweds Sophie and Harry were spotted sharing a cute moment with their one-year-old son Albert.

The wedding party then headed off to the reception where they let loose, as seen in Katie’s Instagram stories.

In a series of clips, the I’m A Celebrity… Get Me Out of Here star shared glimpses of son Junior adorably singing his debut single Slide to younger sister Bunny, while Katie’s mother Amy Price looked to be enjoying herself.

However, missing from the special day was Katie’s fiance Carl Woods, who was reportedly banned from the event by Sophie.

A source claimed to The Sun that the bride uninvited the car dealer from her wedding after he was charged with threatening and abusive behaviour.

The charges were dropped earlier this month and Katie had hoped Sophie would change her mind about Carl, 33, attending, but a source claims she would rather avoid the possibility of any ‘drama’ completely.

‘Katie really hoped Carl would be able to come to the wedding and Sophie would change her mind but the guest list is already finalised and she respects her sister’s wishes,’ the source told The Sun.

‘She doesn’t want anything distracting from Sophie’s big day and she knows it’s not about her or Carl. Katie will be there with a big smile on her face to celebrate her sister, but of course it makes her sad to not have Carl by her side.’

However, the insider said that while Carl was ‘disappointed’ for Katie, he ‘understands’ and ‘wishes Sophie and Harry all the best for their big day’.