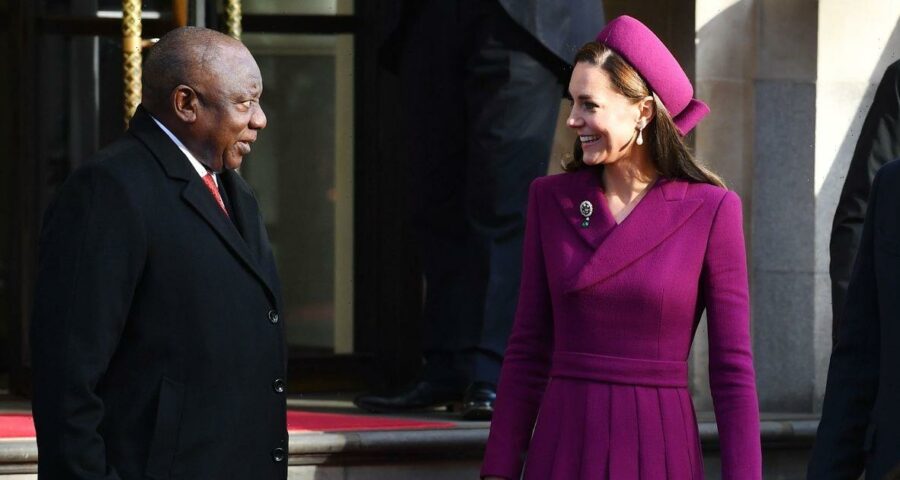 Kate Middleton, the Princess of Wales, showcased a special pendant brooch during a Royal engagement for the first time today (Tuesday 22 November), and jewellery experts have now confirmed the piece's origins.

The Royal mum-of-three stepped out with her husband Prince William, the Prince of Wales, 40, to greet President Cyril Ramaphosa, who is the President of the Republic of South Africa.

President Ramaphosa is conducting a state visit in the UK, and King Charles III and Queen Consort Camilla will also be hosting the president during the special occasion.

Kate, 40, and William met the president at the Corinthia Hotel in London, and Kate looked stunning in a plum dress and matching hat, which featured an oversized bow at the back.

With her brunette locks styled into her trademark bouncy blow dry, Kate finished off her outfit with matching heels and a selection of carefully-chosen jewellery, which also featured a pair of drop pearl earrings that belonged to Queen Elizabeth II.

The central piece of the Royal's brooch pendant has been confirmed as the Prince of Wales crest, and was flanked by a series of tiny rubies, blue sapphires, white diamonds and emeralds, which are likely to represent the Welsh flag.

Dating back to 1863, the £350,000 piece was originally presented to Princess Alexandra of Denmark when she married the future King Edward VII.

Jewellers Steven Stone revealed that the Ladies of North Wales society gave the pendant to Alexandra as a wedding gift.

After the Princess's death in 1925, the pendant was then passed down to the Queen Mother, who later gave it to Princess Diana.

The late Princess of Wales was often seen wearing the stunning piece during her engagement and marriage to Charles.

Diamond expert, Maxwell Stone, told OK!: “Laced with history, the Prince of Wales Feathers Pendant is an incredibly interesting piece that dates back to 1863, when the future King Edward VII married Princess Alexandra of Denmark.

"As was tradition at the time, various organisations from around the UK presented Alexandra with wedding gifts – one society was the Ladies of North Wales, who presented her with the striking pendant that emphasized her new positions history."

"It’s heartwarming to see that Kate Middleton has been seen wearing the pendant as it not only serves as a nod to her new position, but it pays homage to her late mother-in-law, Princess Diana, who wore the pendant regularly during her marriage to the then Prince Charles," the expert continued.

President Ramaphosa's visit to the United Kingdom will focus on the longstanding scientific and conservation partnerships between South Africa and the UK.

Prince William and Kate Middleton have been tasked with huge roles for the State Visit and travelled with the President to Horse Guards Parade, where he received a Ceremonial Welcome.

The King then held a private lunch at Buckingham Palace, where he invited the President to view an exhibition in the Picture Gallery of items from the Royal Collection relating to South Africa.