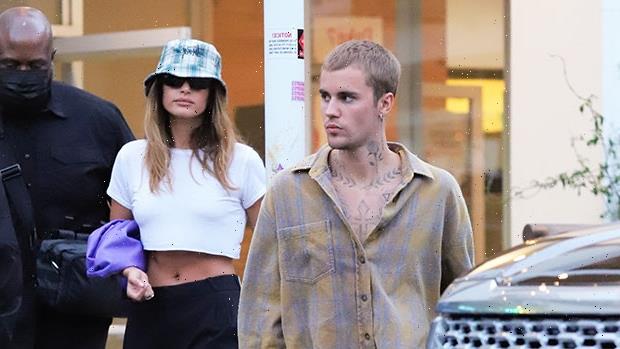 Justin Bieber gave fans a closer look at his life with wife Hailey Baldwin on Aug. 10, when he shared a few personal photos on Instagram.

Justin Bieber, 27, and Hailey Baldwin look so in love in a gorgeous new photo the singer shared on his Instagram account on Aug. 10. Justin didn’t include a caption, but he didn’t need to — just look at how much he adores Hailey in the image below.

“THIS ENERGY YALL”, one commenter wrote, while another called them “the hottest couple”. And to be honest, the commenter couldn’t be more right. In the never-before-seen photo, which was shared with Justin’s 188 million followers, he’s seen nuzzling his chin into her shoulder as she snaps the selfie.

Hailey, 24, looks incredible in a figure hugging baby blue latex dress, as she grabs onto one of Bottega Veneta’s “pouch leather clutches” that matches her outfit. Meanwhile, Justin is dressed in a black pinstripe blazer with a silk, button down black shirt underneath. And they both accessorized their looks with some fancy jewelry.

Before posting the couple’s photo, Justin shared a few shots of himself in the same outfit, and again didn’t include a caption. And as you can see above, the necklace he’s wearing is pretty colorful. He’s also showing off a bit of his muscular chest, which drove a lot of his followers wild (including us).

While we don’t know where Justin and Hailey were heading after snapping their photo, we do know that they love date nights. Just recently, they enjoyed some dinner together at Nobu in Malibu. And before that, they were pictured at Lucky’s Steak House in Montecito, California. They were dressed more casual for those dates, but even so, they definitely make it a priority to show each other how much they love one another.