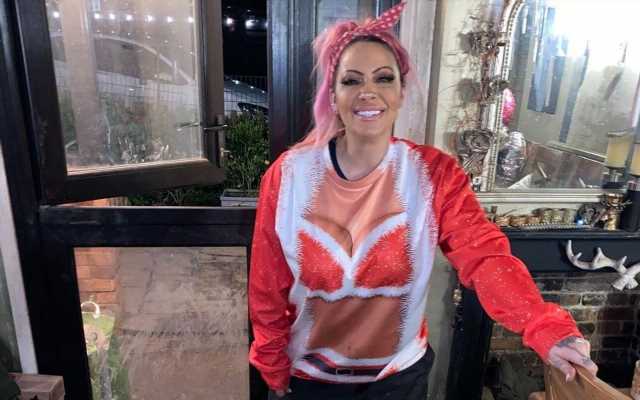 The ‘Celebrity Big Brother’ alum reveals she chose to become a lap dancer instead of pursuing the opportunity to enter higher education after graduating from a private school.

AceShowbiz –Jodie Marsh earned “£10,000 a week” as a stripper. Attending the fee-paying Brentwood School in Essex, the former glamour model gave up the opportunity to enter higher education to get a job at Stringfellows – the legendary lap dancing club owned by the late Peter Stringfellow – and the money she made was astronomical.

“I went to the best private school ever and then I just became a lap dancer,” the 43-year-old television personality told UK politician-turned-presenter Nigel Farage on his GB News TV show “Talking Pints“.

“I don’t know. I got offered a job. I used to go to Stringfellows on a night out and I was sitting there one night and somebody said ‘why do you keep coming here for a night out you should work here.’ “

“The guy said yeah you could make a fortune, and I said how much are we talking and he said at the time it was about £2k per week or something like that. Anyway I ended up working there and I made about £10k per week, it was great fun.”

Jodie’s answer came after the 58-year-old broadcaster – who attended the uber exclusive south London boarding school Dulwich College – asked her “what happened” that made her change her plans from becoming a lawyer to being an exotic dancer.

Nigel asked, “You went to Brentwood School and were doing really well. Much better grades than I got. You had the grades you were thinking about becoming a lawyer. You had it all going for you. And you became a lap dancer. What happened?”

“That group of women who got together to try and ban the lads’ mags all they actually did was put women out of work. Because not only us the glamour models, but most of the staff working on those shoots were female. My hair stylist, my make-up artist, and photographer was female.”

“The art director, the stylist for the clothes, we were like one big family on the lads’ mags and they just put women out of a job.”

Her comments prompted the former UKIP leader to ask, “So you don’t think it was demeaning, you were doing it in your own free will?” To which Jodie replied, “No, I was exploiting the men, they were paying to see me.”

“If you go on holiday now to say France you will 100 per cent somewhere there see a woman topless on the beach for free. They paid a fortune to see my boobs, I exploited them.”